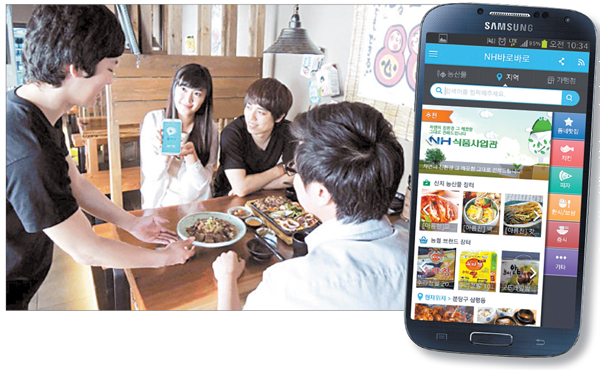 In the smartphone of 30-year-old Eric Hwang, who operates a Japanese Izakaya in Seocho-dong, southern Seoul, message notifications such as “Need a place to have dinner and drinks for seven people” or “We are looking for a gathering place at 8 p.m. priced about 200,000 won [$179],” constantly pop up.

When Hwang responds with comments like “We give a 15 percent discount” or “We give one free bottle of sake,” customers can immediately make a reservation using their smartphones.

Sales have increased as such special deals are offered every couple of days.

The direct-trade market, where consumers and producers negotiate to purchase and sell goods and services through mobile applications, is growing along with the use of smartphones and location applications and mobile payments.

The result is a streamline process that is expected to help small business owners and farmers who cannot afford large scale promotions and publicity campaigns to reach potential customers.

When people write conditions such as “Four people in Gwanghwamun for birthday party for about 100,000 won” on the mobile app, messages are automatically sent to nearby restaurants, who compete for their businesses with discounts or additional services. Customers can then make reservations and get directions.

“Discount coupons by existing social commerce apps led to bleeding competition for lower prices and ended as just one-off events, distributed to an unspecified number of consumers,” said Hwang. “With Stone Fastball, the price is agreed upon properly and I get more loyal customers because they are satisfied that I can communicate with them in real time.”

The application has attracted more than 1,000 restaurants and bars in just one month since its release.

The app, whose name means right away in English, is available for Android and iOS, and was co-developed by smart mobile service provider Infobank and Nonghyup, the national agricultural cooperative.

NH Barobaro offers 1,300 items by about 700 merchants and one-stop service, from ordering to bargaining to payment. Payment can be made with a credit card or bank transfer, a system for which Infobank owns seven patents.

There are also apps that connect with convenience services, such as Avatar 25, which can be downloaded from Google Play Store.

The app, released last December is a kind of mobile labor market connecting a “host” that orders errands and an “avatar” that performs them.

When an avatar registers as a member of the app by writing down the types of work it does, available time and locations, the host also writes the contents of work, location and how much it wants to pay for the service.

From buying and delivering food to shopping at discount stores to delivering gifts to wedding halls to insect eradication, a variety of chores are available using the app.

The Good Doc app can suggest suitable hospitals with pictures and doctors based on user input.

One-to-one counseling about the cost of certain procedures is also available.