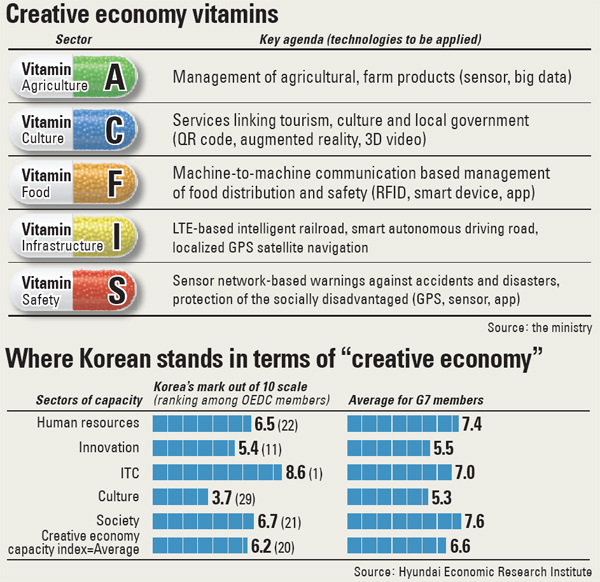 The Ministry of Science, ICT and Future Planning, the flagship ministry of the Park Geun-hye government, has come up with what it describes as detailed action plans to push ahead with its creative economy initiative.

Over the next five years, the government will spend 40 trillion won ($35.8 billion), including 6.9 trillion won this year, on marrying science technology and ICT (information and communications technology), thus establish the so-called “creative economy ecosystem,” said Choi Mun-kee, minister of science, during a press briefing yesterday at the government complex in Gwanghwamun, central Seoul.

The ecosystem will eventually contribute as many as 650,000 new jobs under the rosy blueprint.

The push for a creative economy is part of the larger government goal announced a day earlier to raise the nation’s employment rate to 70 percent.

The government expects that incorporating advanced and innovative technologies with industries that have been falling behind would not only create new markets and industries but also become a new growth engine.

Such expectations might include implementing an IT-based livestock management system, building a greenhouse that conserves energy or simplifying payments at traditional markets through smart devices.

“Our strategy of pursuing [advanced economies], which have been the driving force behind our economic growth in the last 40 years have hit a limit against the backdrop of global economic crisis and pursuit by emerging industrial countries,” said Choi.

“We have come up with this strategy to transform our economy from pursuing [advanced economies] through copying and applying [existing technologies] to a leading [economy] founded by the creativity of the people.”

The government, in realizing the creative economy, has set three large goals, six strategies and 24 projects, including the vitamin project.

The three goals are to create new market and job opportunities through creation and innovation, solidifying a position of global leadership through a creative economy, and establishing a society where creativity is respected and freely exercised.

The basic concepts of the strategies are to create an ecosystem that will help anyone with talent and an idea to easily start a business while positioning startups and small and midsize companies at the center of Korea’s economic growth; develop creative talent; and challenge attitudes while strengthening the science and technology sector.

Under the first step of supporting idea businesses, the government plans to inject 2.6 trillion won into startups and small and midsize companies through funds and investments.

Funding to help those who have failed once to get a second chance will be raised from this year’s 40 billion won to 100 billion won by 2017.

One of the noticeable features announced yesterday was the plan to ease regulations to attract talented foreigners to start businesses here while also encouraging Korean startups to tap global markets.

In order to do so, the government said it plans to issue a visa for foreigners with expertise in innovation and technology.

Additionally, the Korean government plans to improve the living environment in Korea by 2017 to help some 300 or so of world’s top 1 percent of researchers living here to become immersed in their studies in international science business belts.

For talented young Koreans hoping to advance their careers outside the country, the government will start a Web site offering overseas job information. Additionally, it plans to send 2,600 people on overseas internship programs to help them accumulate on-site knowledge and experience.

However, not everyone is happy with the blueprint. Choi Jae-cheon, a lawmaker with the opposition Democratic Party, said yesterday’s announcement from the ministry was still “uncreative and vague.”

“The blueprints are slight modifications of policies and measures that President Park came up with as part of campaign pledges as well as those from previous government,” he said, “Neither do they present how to mobilize financial sources. Just because you have established a government organization that tags the word ‘creative’ in the title, it doesn’t mean a creative economy automatically flourishes.”