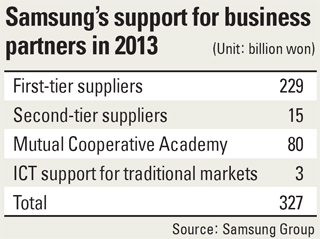 Samsung Group, the nation’s largest conglomerate, announced yesterday it will invest 1.2 trillion won ($1.1 billion) over the next five years to support business partners and subcontractors.

The group, which has Samsung Electronics under its wing, said it will spend 327 billion won this year to foster a business culture of shared growth. The initiative is in line with President Park Geun-hye’s plan to promote better relationships between conglomerates and small or midsize businesses.

For its first-tier suppliers or cooperative firms, Samsung said it will select 19 companies this year to receive funds and assistance with technology development and business issues. Eleven affiliates from Samsung Group will kick in 177 billion won this year, with Samsung Display injecting 77 billion won followed by Samsung Electronics at 42 billion won.

The group aims to help 50 cooperative companies go global by 2015.

To enhance the group’s relationship with suppliers, Samsung said it will examine first-tier suppliers’ contracts with subcontractors for fairness.

To manage these support programs, Samsung said it will set up a Mutual Cooperative Academy in Suwon, Gyeonggi, at a cost of 100 billion next year. Until then, Samsung Electronics’ Advanced Technology Training Institute will serve as the hub. The academy will recruit Samsung executives and employees to become experts to work with suppliers and cooperatives. It will also offer 41 training courses for employees of Samsung’s subcontractors and expects 5,500 participants this year.

Samsung also will open some patent-protection technologies to SMEs and small venture companies. It will post useable patents on its Web site (www.secpartner.com) and those who apply for certain patents can use them for five years. Samsung has opened 1,752 patents to its cooperative companies since 2011.

Meanwhile, the group said affiliate Samsung SDS will help merchants from traditional markets to get familiar with information and communication technology (ICT). The group plans to invest 12 billion won with the goal of producing 500 ICT-savvy merchants over the next five years.