Fewer people taking the time to separate their recyclables

Fewer people taking the time to separate their recyclables 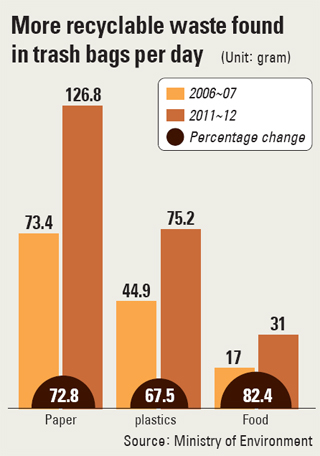 Kim Hee-jin, 42, a resident in Goyang, Gyeonggi, believed she was properly following the garbage separation system, which has people separating their garbage into several categories either for recycling or to be sent to a landfill.

But lately, the mother in a two-income household has been lazy.

Sometimes she puts plastics or empty cans into the plastic garbage bags.

“My husband told me to just put all the garbage together when he saw me separating things like vinyl, polystyrene and plastic packing cases,” Kim told the JoongAng Ilbo.

In Korea, recyclables can be separated and put into the designated receptacle near someone’s residence, and are picked up along with trash bags and food waste, which are put into designated government-issued bags for the two types of waste.

The volume-rate garbage collection system - which applies to regular garbage from households and businesses and charges for the amount of trash that is generated based on the “polluter pays” principal - was implemented in 1995.

The system was introduced as an effort to reduce the volume of garbage being buried and burned to protect the environment. The effort has been gradually embraced, but people are starting to recycle less and throw away more recyclable waste now.

When the Environment Ministry looked into garbage bags, the volume of paper waste was up by 72.8 percent, while the volume of plastic waste increased by 67.5 percent in the last five years.

The ministry stated that the volume of recycled waste generated by one person, however, increased by 2.2 percent, or from 319.9 grams to 327 grams per day and the volume of food waste generated by a person per day decreased by 6.4 percent, from 332.5 grams to 311.3 grams in the same time period, meaning that people have just put more waste that should be separated into their trash bags.

The Environment Ministry said that the total volume of waste that a person generates per day (including garbage dumped with government standardized trash bags, food waste and recyclable waste) increased by 8.2 percent, from 878.9 grams to 940.4 grams over the last five years.

When the first study was conducted in 1996, the average volume was 1,130 grams and the average was on the decline.