‘Mai Ratima’ tackles the challenges of a multicultural Korea

‘Mai Ratima’ tackles the challenges of a multicultural Korea 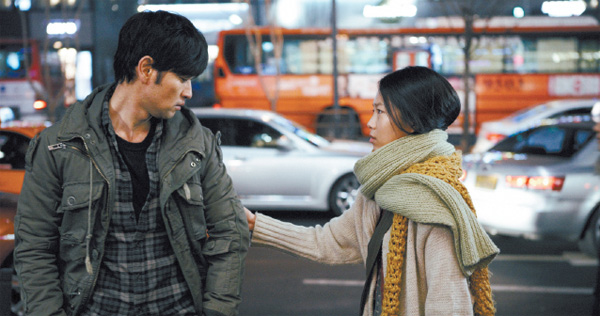 The plight of the underdogs of Korean society is examined closely in Yoo Ji-tae’ s first feature film as director, “Mai Ratima.” Provided by Wannabe Fun

After securing praise from abroad, actor-director Yoo Ji-tae is set on dazzling fans at home with his controversial, multicultural melodrama “Mai Ratima.”

The film, which won the Jury Prize ex aequo at the 15th Festival du Film Asiatique de Deauville this year, centers on a Thai girl named Mai Ratima who marries into a Korean family. An an illegal immigrant who is worked to the bone by her in-laws, she is the victim of all sorts of abuse. Throw in a provincial deadbeat who rescues and woos Mai Ratima, and against the backdrop of Seoul, you have a tale of two characters hard to encounter in Korean cinema.

Produced on a tight budget, the set was described as “like no other” by male lead Bae Soo-bin, who plays the “loser” Soo-young. He called it “the most selfless” set he’s ever been on, and despite soldiering through the coldest winter in 40 years, he said that there was solidarity behind this work which examines the touchy issue of multiculturalism.

Joined by his leads Bae, Park Ji-soo and So Yoo-jin at a press screening, Yoo said the complicated love story between an illegal immigrant worker and a deadbeat was a long time coming.

“The synopsis is from 15 years ago actually. But then, I thought of a middle school girl as the lead,” said Yoo, reminiscing back to his college days where he first conceived the idea.

“But over time, I thought that those who are marginalized in society have changed, and that’s why I changed the lead to a female illegal immigrant.

And while Yoo admitted that some foreigners do actualize their “Korean Dream,” he said he “wanted to focus on those who have it hard here in order to change the society and the way it stereotypes them.”

And because Yoo is all about shaking things up, he also cast a newbie to play the crucial lead.

Yoo said that he studied a list of newbie actresses before he settled on Park.

“For my debut role, I was fortunate that my character covered a wide spectrum of acting,” Park explained.

And to get her Thai accent and demeanor right, she said she spent a lot of time working out to be “native thin” and also had a Thai tutor.

If Park plays the naive protagonist, the film’s antihero would be Young-jin played by actress So Yoo-jin. Soo-young’s other love interest, the femme fatale Young-jin, is a bar hostess and occasional escort who embodies all that is corrupt and sinful about city life.

“Young-jin is like the wind. She waltzes in and out without a trace,” So said.

Although on the surface her character is a bit different from the two other leads, So said “the more I thought about it, I didn’t think she was that different. Although she looks like she lives a glamorous life, she actually lives a lonely life.”

And the common factor among the three characters, according to So, is that “they are all learning through growing pains.”

On playing the male lead who ends up falling for both the goody two-shoes and the femme fatale, Bae said his role was relatable.

“In some ways it’s my story, too,” he said. “As you live, you make choices, hurt people and so on, and hopefully you grow as a result. It’s the story of everyone out there, and I tried my best to breathe life into my character.”

As someone who, like his character, has “experienced a lot,” not to mention a wedding coming up, Bae said taking part in a movie like this made him want to “try living in a way that benefits society.”

This do-good mentality echoed by Bae was no doubt what sparked the idea of the film for the director.

“I think it’s our teamwork that resulted in the success of the film,” Yoo said. “Of course you need more than passion, and so I’m thankful to the staff for their support.”

Up until this point, Yoo said he “focused just on producing” and so has little idea about how the film will be received.

But if press reactions are anything to go by, the film looks to be a hit with fans. It opened nationwide yesterday.