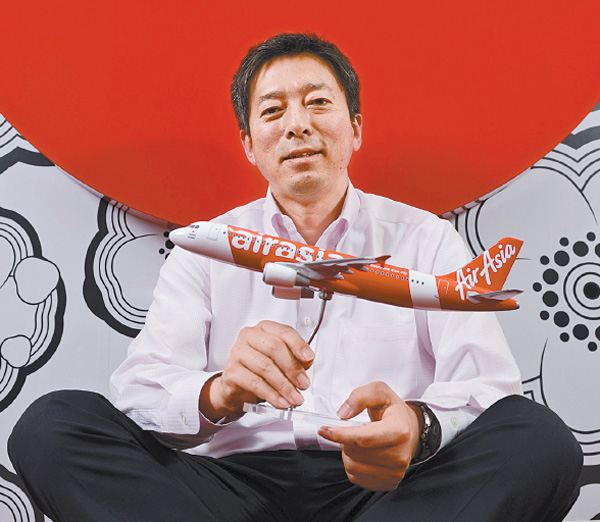 Yoshinori Odagiri, CEO of AirAsia Japan, poses Wednesday with a model of an AirAsia Airbus SAS A320 aircraft in Narita, Japan. [BLOOMBERG]

AirAsia Japan, one of the three Japanese low-cost carriers that started last year, is adding more overseas flights to increase foreign-currency revenue to offset a rise in fuel and lease costs caused by a weaker yen.

“We’re trying to balance the increase in costs with more inbound flights from overseas,” said Yoshinori Odagiri, chief executive officer of the carrier, on Wednesday.

AirAsia Japan, which flies from Tokyo’s Narita and Nagoya’s Chubu airports, will start daily flights to Taiwan next month, Odagiri said. The yen has slid 17 percent in the past six months against the dollar, driving up expenses for Japanese carriers as jet fuel and lease charges are priced in dollars.

“The benefit of adding international flights is that it’s a natural way to hedge costs,” said Ryota Himeno, an analyst at Barclays Securities Japan Ltd. “Japan low-cost carriers are still getting started and so there’s still plenty of room for them to expand capacity.”

AirAsia Japan, a venture between the region’s biggest discount carrier, AirAsia Bhd., and Tokyo-based ANA Holdings, aims to be profitable in the fiscal year starting next April 1, Odagiri said. The airline will expand its fleet to nine planes from four by the end of March, he said.

The carrier, which has five domestic routes, will start Taiwan flights from Tokyo’s Narita on July 3. Its current overseas service is to Seoul and Busan.

The airline began operations in August, following the start of service by discount carriers Peach Aviation and Jetstar Japan. AirAsia Japan offers fares less than half the price of Japan Airlines and ANA.

AirAsia Japan gets about 40 percent of its sales on international flights from overseas customers and the rest from passengers from Japan, Odagiri said. The carrier has tied up with travel agents in Taiwan to sell packages that include its flights, he said.

The yen has plunged since November, when then-opposition leader Shinzo Abe said the Bank of Japan should carry out unlimited monetary easing. Abe became prime minster the following month after his Liberal Democratic Party won a landslide victory in parliamentary elections. Abe’s nominee Haruhiko Kuroda became governor of the bank and unveiled plans in April to double the money supply in two years to end deflation.

AirAsia, based in Sepang Selangor, Malaysia, holds 33 percent of AirAsia Japan with ANA owning the balance. ANA also has a stake in Peach. Jetstar Japan’s shareholders include Japan Airlines and Qantas Airways.