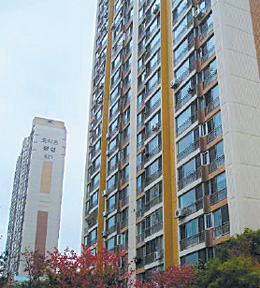 The 21-year-old Hyundai Apartment complex in Hyojachon in Gyeonggi might be eligible for renovation under the proposal. [JoongAng Ilbo]

A new niche business is expected to breathe new life into the moribund housing market as the government is allowing renovation of small and old apartments as part of efforts to increase the number affordable homes and boost transactions.

The Ministry of Land, Infrastructure and Transport said yesterday the government would allow raising the height of apartments built more than 15 years ago by a maximum of three by revising a law this month at the National Assembly.

The revision is a follow-up measure to the government’s April 1 real estate plan and represents a significant change, since current law affects only apartments that are 40 years old or older. Under current law, renovation means demolition and rebuilding on the same site.

Lawmaker Shim Jae-cheol of the ruling Saenuri Party submitted the bill on Wednesday to the National Assembly. If passed this month, the law will be effective from next year.

According to the ministry, there are about 4 million eligible apartments nationwide. Specifically, buildings up to 14 stories would be able to add two floors and 15-story or higher buildings could add three. The number of households in those buildings would increase by 15 percent from the current level, and footprints could be expanded by 30 to 40 percent.

The ministry expects a renovation boom in Bundang and Ilsan, the first generation of the country’s new town projects, where demand for apartment renovation is on the rise.

The government will help reduce the financial burden for building owners by providing loans with a 3 percent interest rate. Those eligible for loans are owners of apartments that are 85 square meters (102 square yards) or less. Each household would need to be able to afford 100 million to 200 million won for a new apartment to participate in a renovation project, the ministry predicted.

“The government expects the financial measure to revive the renovation market as it will ease the burden on people,” said Kim Jae-jeong, an official at the Land Ministry. “But an additional plan is needed for each town planning for renovation to secure more parking lots and other public facilities as the number of residents will increase.”

The construction industry welcomes the change.

“The market has long been asking the government to revise the renovation law and much has been reflected in the latest plan,” said Cha Jung-yoo, secretary general of the Korea Remodeling Association.

“The government’s plan offers a bright prospect for construction companies, because increasing the actual number of households by 10 to 15 percent can actually lead to profits for builders,” said Lee Geun-woo, a manager at Hyundai Development Company.

Still, there are skeptical views that not many resident would want to renovate their houses by spending an extra 100 million to 200 million won.

“Especially senior citizens who own more houses than young people would be less willing to afford the costs and be passive about the new policy,” said Lee Young-joo who is a real estate agent in Bundang, Gyeonggi. “The ongoing downturn doesn’t help at all.”