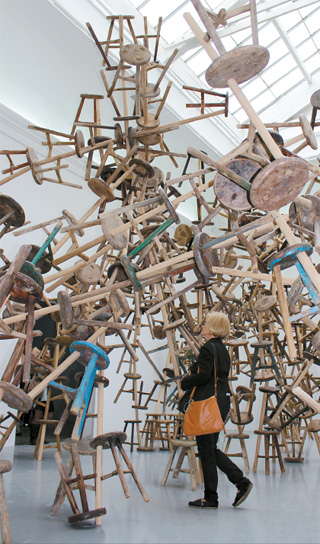 A visitor passes through the installation titled “Bang” by China’s dissident artist Ai Weiwei at the German pavilion during the preview of the 55th Venice Biennale (La Biennale di Venezia) on Friday. By Moon So-young

VENICE, Italy - “The Encyclopedic Palace,” the main international art exhibition of the ongoing 55th Venice Biennale, seems to be an expanded and more sophisticated version of “10,000 Lives,” the eighth Gwangju Biennale in 2010, by the same young Italian curator, Massimiliano Gioni. But it lacks the sociopolitical dynamism that the Korean biennial show had, some experts pointed out.

The Venice biennial exhibition opened on Saturday at two venues - the Central Pavilion in the Giardini and the old shipyard site Arsenale.

The Arsenale show starts with a model of the “The Encyclopedic Palace,” an imaginary gigantic museum intended to house all the knowledge of the human race, from which Gioni took the title of the show. The model and concept of the museum was made by a self-taught Italian-American artist, Marino Auriti (1891-1980).

Though his dream was never realized, Auriti typifies humans trying “to fashion an image of the world that will capture its infinite variety and richness,” Gioni wrote in the introduction note. Gioni, 39, is the youngest curator ever at the world’s oldest and largest non-commercial contemporary art exhibition, which has been running since 1895. 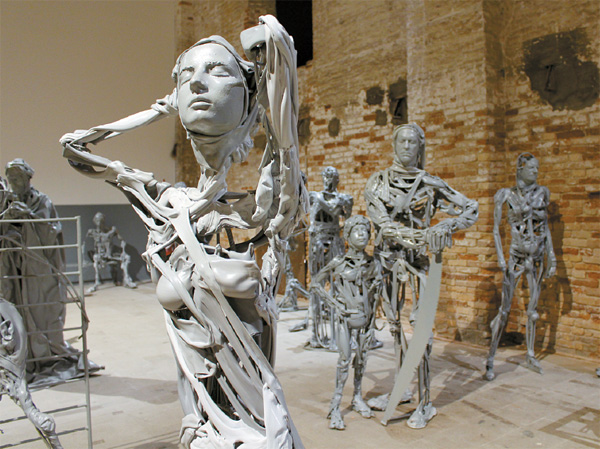 The Giardini show opens with works by Carl Gustav Jung, a legendary psychologist who is not normally associated with fine art. Under the splendid dome of the Central Pavilion’s rotunda are displayed pages from Jung’s Red Book, an illustrated manuscript made over 16 years that catalogues his visions.

That which brought favorable reviews about “10,000 Lives” has been reinforced with this exhibition: the display of works by famous masters and self-taught or obscure artists side by side under proper themes, an anthropological approach to various images, and the elaborate combination of contemporary artwork, artifacts, documentary photos and found objects. They bring about fresh aesthetics and intellectual curiosity, so are public-friendly.

Regarding connections with the Gwangju Biennale, Gioni said in an interview with the London-based Art Newspaper on May 23, “I think of this show in Venice as the ‘second volume’ of a research project that I started at Gwangju.”

He also said in the interview, “In Gwangju I focused on the idea of ‘the image’ as characteristic of our present, particularly photography... ‘The Encyclopedic Palace’ is a show about imagination, the visualization of dreams and internal imagery, and relating them to artificial imagery.”

The focus on “dreams and internal imagery” can be visually appealing but can also be a weak point of the exhibition, some have said.

Riccardo Beretta, a Milan-based artist, said the exhibition is “very personal” as it focuses on the artists immersed in their inner worlds. It lacks artists’ views about society and deliberations about relations with society, he said.

“The exhibition is like one big universal museum arranged in the united context and filled with artifacts collected from all over the world, somewhat with Western colonial attitudes,” said Iris Dressler, co-director of Wuerttembergischer Kunstverein in Stuttgart, Germany.

“It is like a museum integrated too well ? without any conflicts between works on display,” added Hans D. Christ, who is working with Dressler as co-director.

The exhibition “has not broken away from the Western-oriented view of history,” said Sook-kyung Lee, research curator at the British art gallery Tate.

Despite the strong link with the eighth Gwangju Biennale, the “Encyclopedic Palace” show, featuring over 150 artists from 38 countries, includes no Korean artists.

“Here I see many artists who participated in the 2010 Gwangju Biennale but no Korean artist,” Lee Han-shin, head of the Art Center Arko under the Arts Council Korea, said in the Venice Giardini last week. “It is very regrettable.”

“I see Gioni has a certain consistent philosophy and concept in selecting artists,” he said. “But he does not seem to have enough understanding of Korean contemporary art to find Korean artists in accordance with his ideas, even though he directed the Gwangju Biennale. That’s the problem.”

Among other national pavilions attracting the attention of viewers are those of France and Germany, which stand opposite each other in the Giardini. The two countries took the unusual step of swapping their pavilions in this edition. For Germany, it invited artists from four countries to show. The artists include renowned Chinese dissident artist Ai Weiwei. He presents “Bang,” an installation of 886 Chinese antique stools that sometimes look as one organism and sometimes like they’re suddenly losing gravity and rising up to evaporate, depending on the angles.