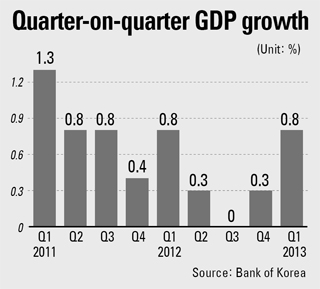 Despite the government’s various efforts to breathe life into the country’s economy, Korea’s gross domestic product (GDP) continued its sub-1 percent growth in the first three months of the year and was below the central bank’s estimate made in April.

According to the Bank of Korea yesterday, the country’s GDP rose 0.8 percent from January through March compared to the previous quarter due to weak consumer spending and low facilities investment.

Yesterday’s figure is down 0.1 percentage point from the central bank’s most recent estimate of 0.9 percent. It was also the eighth consecutive quarter that GDP growth has been below 1 percent. The last time the growth figure exceeded 1 percent was in the first quarter of 2011, when quarter-on-quarter growth was 1.3 percent.

“The revision [in the growth rate for first quarter] was inevitable because it reflects new data such as figures from the Korea Customs Office that we were not able to take into account when we announced the estimate [in April],” said Jung Young-taek, a BOK official.

The low growth figure comes despite the Park Geun-hye government’s efforts to boost the economy, which has been affected by a slower than expected recoveries in the United States and European Union. Japan’s expansionary monetary policy has also taken a toll on the price competitiveness of Korean exporters.

Amid difficult external conditions, the Ministry of Strategy and Finance came up with a supplemental budget of 17.3 trillion won ($15.4 billion) that the National Assembly approved in May. Also last month, the central bank made a surprise move by cutting its benchmark rate for the first time in seven months to support the government’s stimulus measures.

According to the BOK’s first-quarter data, domestic demand fell 0.4 percent from the previous quarter, raising concerns over a slump in private spending. Domestic demand showed its largest quarterly decline since the first quarter of 2009. Koreans have been tightening their purse strings under total household debt that is nearing the 1,000 trillion won mark.

Government spending, on the other hand, rose 1.2 percent over the same period while facility investment rose 2.6 percent. Spending in the construction sector jumped 4.1 percent while exports rose 3 percent, led by strong demand for petrochemical products. The revised figures were lower than previous estimates.

Meanwhile, the country’s total gross national income in the January to March period rose 0.8 percent compared to the previous quarter, the BOK said, compared to 0.3 percent in the fourth quarter of 2012.