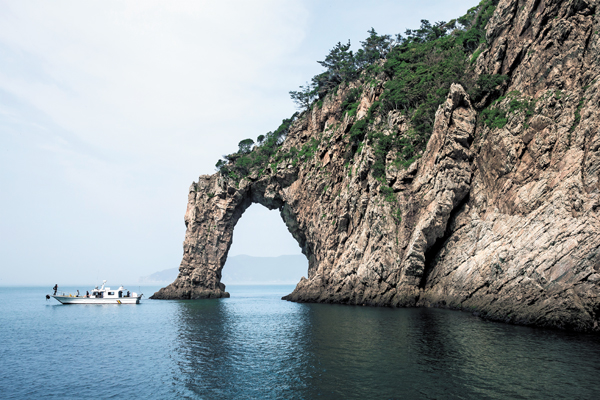 Seokjudaemun, the biggest elephant-head-shaped rock in Korea, had long been claimed as part of the landscape of Heuksan Island, but it is actually one of the eight scenic landscapes of Yeongsan Island. By Shin Dong-yeon

Yeongsando, or Yeongsan Island, is one of 359 islands in Dadohae National Park in Sinan County in South Jeolla. It’s a tiny island; its population is 43 people from 23 families. Few Koreans know of the island although it’s near Heuksando, or Heuksan Island, only 10 minutes away. More than 180,000 people visit Heuksan every year. In Yeongsan, there are only 300 to 500 visitors every year.

However, things began to change last year. Stone fences were set up and deserted homes have been transformed into lodging houses. The walls are embellished with flower designs. The seaside village is now full of life after being transformed into an eco-tourism village, thanks to a “luxury village” project by the Korean National Park Service. A JoongAng Ilbo reporter and a photographer recently hit the road to this yet-to-be-discovered destination for weekenders. 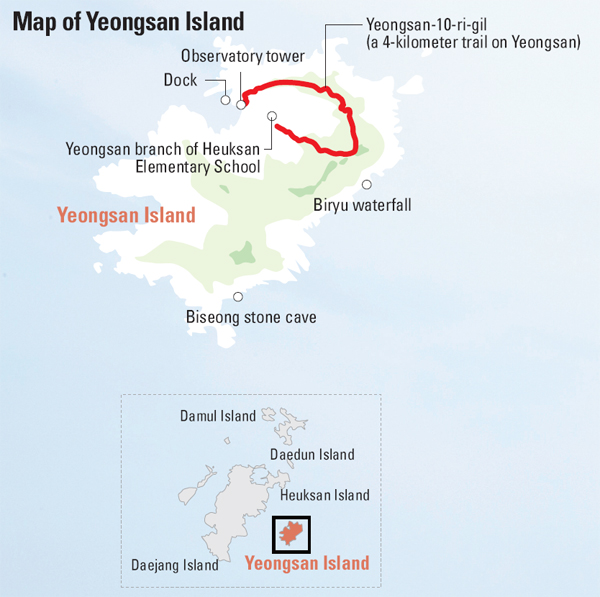 Yeongsan is a hardly known island, but it’s actually one of the 100 satellite islands of Heuksan. Every thing that came out of Yeongsan was branded as Heuksan. One of those items is hongeo, or fermented skate. Heuksan first comes to mind when people talk about hongeo, a delicacy of the region that is now being enjoyed across the country. But people who have lived on Yeongsan for a long time claim that skate fishing in Korea was started by Yeongsan islanders.

Few documents remain to prove their claim, and the government has endorsed Heuksan by giving a fishing quota of hongeo to the bigger island to preserve a sustainable market for the expensive fish. Currently, only seven designated ships run by Heuksan residents and one ship from nearby Hong Island are allowed to catch hongeo.

Choi Seong-gwang, the head of the only village on Yeongsan, called Yeongsando-ri, is resisting Heuksan’s claim to hongeo.

“When I was young, there were many hongeo fishing vessels at Yeongsan Port,” said Choi. He said that he lost his two brothers while they were fishing for hongeo.

Choi based his claim that Yeongsan is home to hongeo on the existence of Hongeo Street in a port named Yeongsanpo in Naju, South Jeolla.

“Many people on Yeongsan have moved to Yeongsanpo since a long time ago. And when many ships from Yeongsan went there, a hongeo street was formed in Yeongsanpo,” Choi said.

“It took around 10 days to transport hongeo from here to Yeongsanpo, and during the 10 days, hongeo becomes naturally fermented and becomes fermented hongeo. Look, people on Heuksan eat hongeo raw without fermenting it,” he said.

Besides hongeo, Yeongsan has other claims to fame. An elephant-head-shaped rock that Heuksan is promoting as its own actually belongs to Yeongsan geographically. The rock, which people on Yeongsan call Seokjudaemun, or stone-pillar gate, appears on the cover page of tourism promotional leaflets issued by Heuksan. It is actually one of the Yeongsan Palgyeong, or eight scenic landscapes of Yeongsan. It is the biggest elephant-head-shaped rock in Korea; even a 30-ton ship can pass under it. Hong Island or Ulleung Island and Dokdo also have similar looking rocks, but they aren’t as big.

Yeongsan is also known for the Biseong (nasal sound) stone cave, Biryu waterfall and Buddha rock. According to a legend, a person who passes under Biryu waterfall three times enjoys eternal youth.

Mount Daenbyeot, which surrounds the village, is shaped like a heavily pregnant woman lying with her untied hair. There are many other strange-looking rocks and steep cliffs along Yeongsan’s seashore. 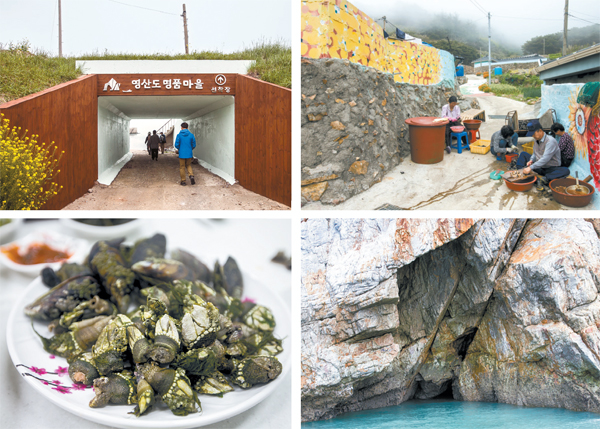 Clockwise from left, a dock on Yeongsan Island promotes the island under its new name, Yeongsan Luxury Village; Yeongsan residents wash mussels; Biseong stone cave got its name from the nasal sound the wind makes as it blows through the cave; a Yeongsan delicacy called “Turtle finger” is a kind of barnacle. By Shin Dong-yeon

The Korea National Park Service started a luxury village project in 2010. Under the project, the government agency has selected farming or fishing villages within the national parks and turned them into ecotourism destinations. The government’s hope is to turn those villages into self-sustainable places by bringing in cash and people through tourism. Gwanmae Island in Jindo County in South Jeolla in 2010 was the first beneficiary of the project and nine villages have been turned into the so-called “luxury villages.”

According to the Korea National Park Service, the five villages selected as the beneficiaries in 2011 have seen a 437 percent growth in income and a 117 percent growth in the number of tourists. Gwanmae’s growth is particularly impressive. Before it was named a luxury village, about 4,553 people visited the island every year. But, last year, 41,349 people came. Its annual income rose from 178 million won ($159,356) to 1.77 billion won.

“The income has increased, but the most important change is that the population of the village has grown,” said Park Gil-seok, a representative of Gwanmae Island Luxury Village. Park said that 10 people from eight households have come back.

Gwanmae’s success encouraged other small islands to flock to become a luxury village. This is why Choi, head of Yeongsando-ri, applied.

Yeongsan was designated as a luxury village in April 2012. The Korea National Park Service gave 1 billion won in subsidies, with which the island paved roads, refurbished old houses and set up fences. A 4-kilometer-long (1.9-miles) trail, which women on the island used when they went out to gather vegetables, was turned into a trail corridor. An observatory tower was set up on the corridor, from which Heuksan Island is visible to the naked eye. A restaurant also opened. 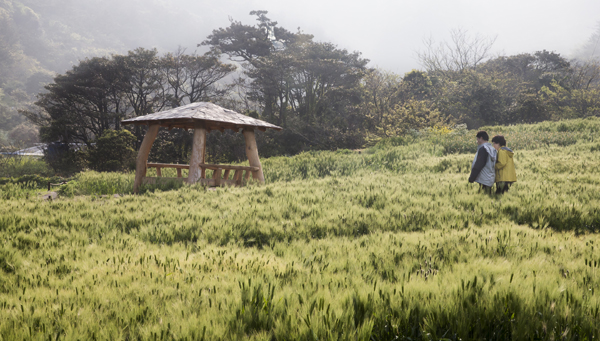 People stroll in a barley field that Yeongsan Island cultivated to attract tourists after it was designated as a luxury village. By Shin Dong-yeon

Such efforts are paying off. Through April, 420 people have visited the island this year, which is almost equal to the number of the visitors for all of 2012.

The village expects about 2,000 people to visit the island by the end of this year, which would produce 100 million won in income for the village.

Yeongsan began efforts to stand alone this year. It wants to be called Yeongsan, not part of Heuksan Island. It is now in the process of being reborn into a healing island where people can come for days of rest.