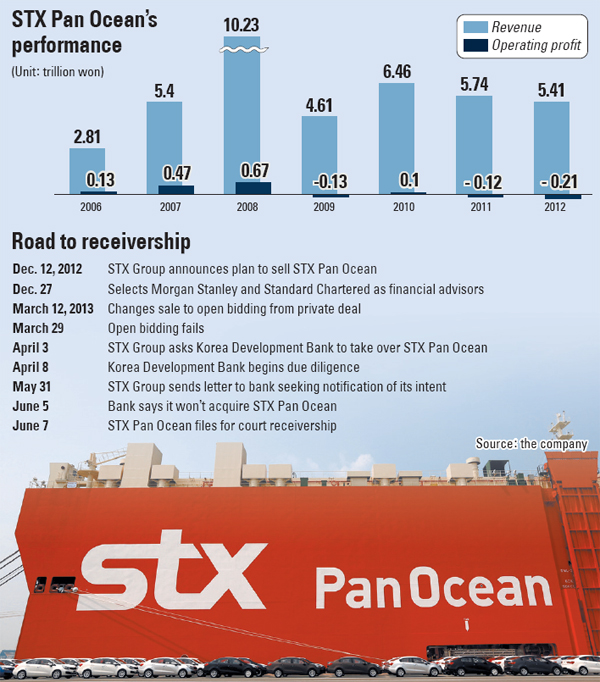 STX Pan Ocean, Korea’s largest bulk carrier and flagship of cash-strapped STX Group, has filed for a court receivership in the face of snowballing losses stemming from the prolonged slump in the global shipping market.

“Despite difficult circumstances in and out of the country, we have tried to retain job security and management normalization, but after failing to override the high tide of the slump in the shipping market we eventually applied for a court receivership,” said Yu Chun-il, CEO of STX Pan Ocean. “When we complete the receivership process, we will restructure the company and improve financial sheets so we will be able to simultaneously graduate from the court receivership and seek early normalization of operations.”

After conducting due diligence to determine whether to acquire STX Pan Ocean at the request of STX Group, the bank notified the group on Wednesday that it would not take over the affiliate.

Market observers said the bank rejected the takeover after discovering during due diligence that Pan Ocean’s bad debts are worse than it expected. The bank refused to comment on the matter.

STX Pan Ocean owes a combined 4.4 trillion won to financial institutions. Of that amount, 200 billion won in corporate bonds is scheduled to mature in October.

In its heyday in 2008, STX Pan Ocean took in 10.2 trillion won in revenue and posted 679 billion won in operating profit.

Financial regulators plan to take no direct action as a result of the court receivership filing, but said they will closely monitor the corporate bond market.

“We don’t consider rolling out a relief measure for an individual company’s corporate bond issue, but we will make all efforts to ensure that STX Pan Ocean’s applying for court receivership will not negatively impact the overall corporate bond market, like we experienced with Woongjin Group,” said an official at the Financial Supervisory Service.

Meanwhile, Korea Development Bank announced yesterday afternoon that it will actively coordinate what it can do as a creditor within the framework of receivership procedures to normalize the shipbuilder’s operation.

“Pan Ocean’s filing court receivership should not stall restructuring plans of other affiliates,” Ryu said. “In the case of STX Offshore and Shipbuilding, creditors will announce a package of operation normalization plans based on the results of due diligence within this month. Among the plans will be granting of 300 billion won in aid.”

Details of the voluntary restructuring plan for STX Group, STX Engine and STX Heavy Industries will be announced by July at the latest, he added.