88-year-old tenor still has a song in his heart

88-year-old tenor still has a song in his heart 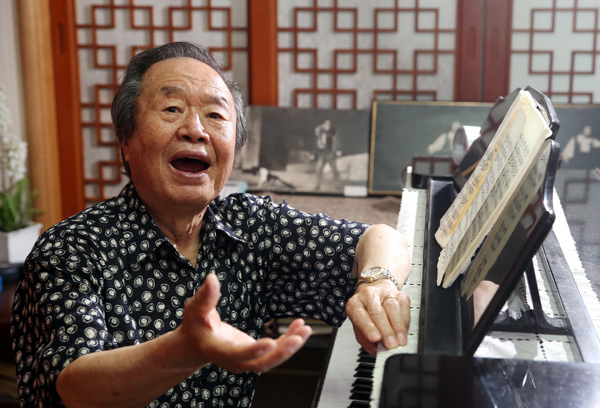 Age is only a number for An Hyung-il. The 88-year-old vocal icon has enjoyed a stellar career spanning 56 years and still performs two or three times a year. By Kim Sang-seon

An Hyung-il, a tenor and professor at Seoul National University, is the godfather of Korean vocal music. At age 88, he still performs two or three times a year and teaches students, some of whom are other vocal professors.

An has performed more than 1,000 times, most recently at Sejong Center for the Performing Arts on May 30, where he sang the aria “La donna e mobile” from Verdi’s “Rigoletto,” the opera in which he debuted 56 years ago.

The JoongAng Ilbo sat with him three days ahead of the concert to discuss his life and career.

Q. It is amazing how brisk and energetic you are, how do you stay so healthy at your age?

A. I work out in the gym for two or three hours a day. It takes more energy to sing if I skip even one day. And I also do vocal exercises for one or two hours every morning. The body is an instrument for vocalists. Vocal cords also lose elasticity with age. Placido Domingo, the legendary operatic tenor, had to switch to baritone since he couldn’t sing in a high pitch anymore. No matter how great a singer you are, you are bound to wane.

Do you feel pressured to sing on the stage?

Sure, so many people praise me. I hope I can live up to their expectations. The song “La donna e mobile” I’m going to sing is very tricky. It is a tall order to sing in such a high register at my age. I’m quite worried about it. In addition, Park Mi-hae and Na Seung-seo, who are my students and will perform with me, are excellent vocalists. They are better than me. It is an honor that I can join them in the concert.

How did you start singing?

My music teacher in middle school was a tenor who learned in Japan. Listening to me, he told me I was cut out to be a singer. So I learned how to sing from him and how to play the piano from his wife. I was born to a very affluent family, so I could buy a piano. Actually, I had an education that almost no other people of my generation could imagine in the early 1940s.

You moved all the way from northern to southern Korea just prior to the outbreak of the Korean War. What made you do that?

I came to southern Korea to attend Kyungsung music school (now Seoul National University), which composer Hyun Jae-myung founded. At the time, there was no music school in Pyongyang and my family was opposed to my singing, belittling it as the work of a clown. But I was so stubborn that I decided to leave home. On my way to Pyongyang Station, my mother accompanied me and gave me 30,000 won. Since then, I did everything to survive, from selling meals on the street to working as a house boy for an American general.

During the Korean War, I joined a music troupe formed by Admiral Son Won-il and performed at places like army hospitals and the American battleship Missouri almost every day. Actually, Admiral Son founded the troupe to support artists. If not for him, artists, including me, would have died of hunger.