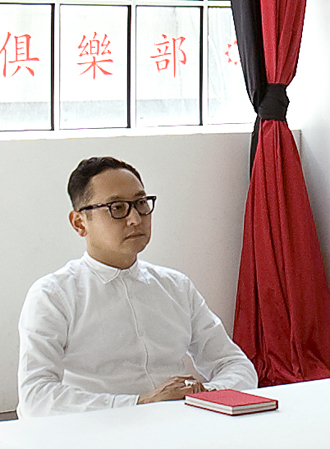 At age 56, he is actively involved in commercial photography with brands ranging from Mercedes-Benz and Salvatore Ferragamo to Hyundai Motor and Hyundai Card. Last month he threw a private exhibition in Tongin-dong, central Seoul, devoted to the Korean novelist-poet Lee Sang and artists during the 1930s.

Kim is also synonymous with the culture in Cheongdam-dong, southern Seoul - once the most fashionable area in the capital - to the minds of those in their 30s and 40s. He founded and ran Cafe de Flora, a restaurant, wine bar and cafe that was the hottest spot among celebrities and locals. However, he sold it to Kim Young-hee, a famous restaurateur and mother of Psy.

The following are the excerpts from a recent interview with him.

Q. Why did you quit running Cafe de Flora?

A. Retail business is eventually about details, I realized. The owner must open and close the door, which means even if you had an occupation, you should devote yourself fully to the restaurant. Now, it’s everywhere, but I adopted the valet parking system for the first time among all restaurateurs in Korea because I thought Cheongdam-dong wasn’t easily accessible with public transportation. But unexpected accidents happened. Once my employee broke the bumper of an expensive import vehicle, and I had to pay millions of won to the owner. I was tired of taking care of every detail and it began affecting my real job as a photographer. So I quit the second job.

Not only Cafe de Flora but also many other restaurants and bars that are recognized for creating the so-called “Cheongdam style” are now gone. Why do you think so?

Many started opening restaurants in the area not because they want to share the culture but to earn a lot of money. Trendy yet similar restaurants sprouted like mushrooms, and rental fees shot up amid rising demand. What the clientele in Cheongdam-dong hot spots wanted wasn’t the parvenu mood offered in the new places, which only cared about interior design. I think it was natural the area stultified.

Some view Cheongdam style as flashy.

It isn’t necessarily about being extravagant. But there are people who are happy when they enjoy afternoon tea and read Shakespeare, and the area caters to their cultural needs. You can enjoy traditional culture elsewhere, like Insa-dong and Samcheong-dong.

It seems like you may have spent time in France or the U.S.

I wandered around Busan, my hometown, and Seoul in my 20s and 30s. In retrospect, it was the time when I could organize my thoughts and widen my perspective. The experience of drinking and eating at the time helps a lot now.