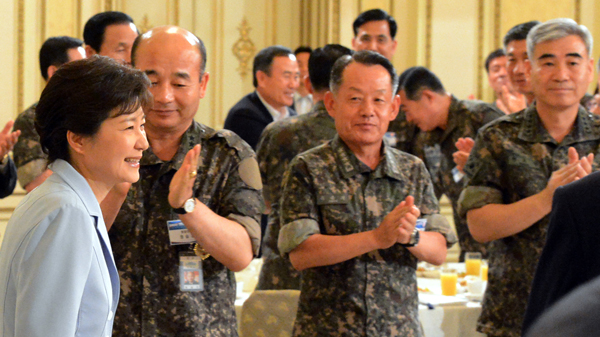 President Park Geun-hye, left, is greeted by senior mlitary officials of the nation’s armed forces yesterday in a Blue House luncheon yesterday. At the meeting, Park reiterated the importance of national security against any military provocations from North Korea. [Joint Press Corps]

While making efforts to create a conciliatory mood with Pyongyang, President Park Geun-hye reiterated the importance of national security against any military provocations from North Korea.

Park hosted a luncheon with senior military officials and commanders of the South Korean Army, Marines, Navy and Air Force yesterday at the Blue House to express her gratitude for their national defense efforts in the midst of recent bellicose rhetoric from the North.

“North Korea yesterday proposed inter-Korean government-level talks, which they had opposed so far,” Park said during the luncheon, cited by the Blue House.

“It was possible because of your hard work, along with our soldiers, maintaining tightened national security under difficult situations.

“In order to proceed with the trust-building process on the Korean Peninsula, the fundamental basis is strong national security,” she said. “If we keep perfect defense posture and anti-North deterrence, North Korea wouldn’t dare to attempt a provocation against us and move forward with real changes.”

Her remarks came after Pyongyang proposed official talks to Seoul on Thursday to discuss a package of agenda items, including the shuttered Kaesong Industrial Complex, adopting a dramatic shift from its hard-line stance to a gesture of reconciliation.

Accepting the proposal, Seoul asked Pyongyang to have a high-level ministerial dialogue in Seoul to be held on Wednesday.

Park Jie-won, a lawmaker of the main opposition Democratic Party who was the South’s special representative during the June 15 inter-Korean summit in 2000, said if a ministerial meeting has a positive result, it could lead to a summit between the two Koreas, which hasn’t been held for about six years.

“If [a dialogue] takes place in Seoul, the North’s representative would definitely visit the Blue House and meet with President Park Geun-hye,” lawmaker Park said in a radio interview with local broadcaster MBC yesterday.

“It would be an opportunity [for the North Korean representative] to deliver a message from North Korean leader Kim Jong-un to President Park.

“If Park approves the visit of a North Korean representative, our delegation would be also able to visit Kim Jong-un later in Pyongyang,” he said. “Accordingly, we can naturally exchange the messages of the two leaders. Only if the two leaders meet with each other, can we make an effective agreement. By doing so, we can build trust.”

A senior Blue House official said nothing has been decided over whether Park would meet with a North Korean envoy on the sidelines of the upcoming talks in Seoul.

“In regards to this matter, we should exchange further opinions as inter-Korean talks proceed,” the official said. “Nothing has been decided specifically.”

In September 2007, Kim Yang-gon, another ruling party secretary, made a secret visit to Seoul and met with then-Southern President Roh Moo-hyun ahead of the second inter-Korean summit.

Meanwhile, the Blue House said yesterday that Park will visit China at the invitation of Chinese President Xi Jinping from June 27 to 30. According to Kim Haing, Park’s spokeswoman, the two leaders will have their summit in Beijing on June 27, and North Korea is expected to be discussed as an important agenda of their talks.

“The two countries’ close cooperation to maintain stability and peace on the Korean Peninsula and the Northeast Asian region will be discussed,” Kim said.