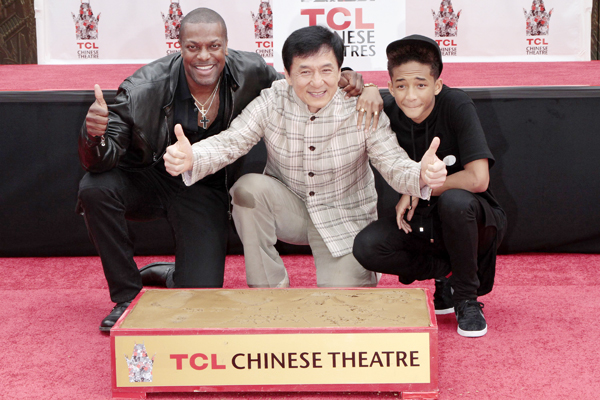 From left, actors Chris Tucker, Jackie Chan and Jaden Smith pose together during a hand and footprint ceremony for Chan at the TCL Chinese Theater in Hollywood on Thursday. [REUTERS/NEWSIS]

Chan, who has starred in some 150 films in a career spanning more than 40 years, first left imprints in the forecourt of the theater in 1997, adding to the collection that features screen legends from Clark Gable to Marilyn Monroe.

But over the years, as ownership of the theater changed hands, the cement slab featuring Chan’s prints was lost. Slabs are changed often to make room for new entries in the collection.

Representatives at the newly named TCL Chinese Theater confirmed that Chan was the first two-time inductee. They said they did not know when the prints vanished but were sure that the slab was not stolen from the forecourt.

On Thursday, Chan left imprints of his hands, feet and nose in cement, accompanied by his “Rush Hour” co-star Chris Tucker and “The Karate Kid” co-star Jaden Smith.

Chan, 59, told a crowd gathered for the occasion that he had always dreamed of having his prints in cement at the theater.

“My first time in the Chinese Theater, I walked on the red carpet .?.?. and I see that there are so many stars doing the interviews. And at that time I had nothing to do, standing there looking around,” he said.

“During all those years I dreamed. Slowly, slowly, I got there,” the actor said.