GWANGHWA, Incheon - It’s a new house, but there aren’t any new things in the house.

Ji Dong-hoon, the head of Ganghwa Hanok Culture Research Center, built his house using old materials that he collected for years. He fixed, tweaked and renovated here and there with the materials. In Korea, even a large-scale apartment complex is built in about three years. In case of Ji’s house, it took him 20 years to complete the construction.

The house, named Damdamgak, is a 16,500-square-meter hanok complex. It is in a seemingly unfitting area, amidst fields and paddies in Gwanghwa, Incheon, west of Seoul. The original Damdamgak, however, was just a 660-meter small and humble hanok that used to belong to Ji’s mother.

Ji now 47 years old started remodeling the house in 1993 as a hobby. Ji certainly knew one or two things about hanok, as he lived in one himself as a child in Jeonju, North Jeolla. The city is well-known for its clusters of decades - and centuries - old hanok.

‘Inside a whale’s belly’ 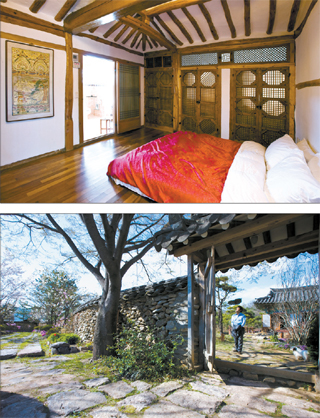 Top: The rooms in Ji’s hanok are big enough to fit large beds. Above: Ji stands in the garden near shuimchae (rest area). By Kwon Hyuk-jae

Ji, who wished to be an artist when he was young, is now in the construction and trading businesses. Because of his father’s wish, he studied business management in college and that’s why he ended up in those sectors. However, he just couldn’t let go of his interests in hanok and “old stuff.” In that sense, Damdamgak was his shelter, a place for his dreams, a laboratory for his experiments, and a gallery for the antiques he’s collected.

“I always felt like I was inside a whale’s belly when I was inside hanok,” Ji said. “When you lie down and stare at the ceiling, you look at seokkarae [the wooden poles used in traditional architecture] and daedeulbo [crossbeams]. They are just like the inside of a whale’s belly. I loved the cozy feeling.”

He first got his hands on the two rooms in bonchae (or the main building), because in most cases with hanok, the rooms are too small to fit in beds and closets. “I believe the hanok that is relevant to the present is the one in which the outside is in original hanok-style while the inside is rearranged so that it doesn’t make today’s people and their life inconvenient.”

As his hands touched here and there, part of the yard became kitchen as well as living room, and the hanok grew bigger and bigger.

After about ten years of renovating hanok, Ji became confident. He bought more land and began building another hanok there. That is how Damdamgak now consists of a massive hanok complex with the anchae [women’s quarters] and sarangchae [men’s quarters], haengrangchae [servants’ quarters], shuimchae [rest area], kitchen and living room. It takes quite some time to look around every corner of this large-scale hanok complex.

Decorations at Ji’s hanok include over 500 figurines that used to decorate funeral biers.[JoongAng Ilbo]

For 20 years, Ji picked up and collected. The shuimchae, for instance, which is packed with high-quality audio equipment and thus good for enjoying music, was actually the main structure of a small temple in Yongin, Gyeonggi.

The temple was on the verge of being demolished due to a city development project. Then it caught Ji’s attention.

Ji is keeping a disassembled temple near his greenhouse that he hopes to assemble later and use as a seminar room. He also has rectangular stones that he brought from a construction site in Sangwangsimni in Seoul. But perhaps the most important piece of his collection is the stone wall that surrounds the entire complex.

“To get stones, there isn’t a place I haven’t been to - mountains, fields, construction sites, abandoned houses, you name it,” Ji recollected. Because he has been collecting things on his own, without going through middlemen, for the past 20 years, these days when something gets torn down officials notify Ji in advance.

Ji certainly made many investments. “People always asked me why I wouldn’t invest my income in things like real estate, and instead spend my time, money and energy on things like hanok,” said Ji ? who is the chairman of the board at Europe Korea Foundation, which is under the European Chamber of Commerce in Korea.

The answer was simple enough. “I just liked it,” he said.

“I worked a little at a time, but steadily for a long time. People are always amazed at the size of Damdamgak, but the size doesn’t really hit me, as I’ve been with Damdamgak for so many years now.”

Every corner of Damdamgak is filled with Ji’s imagination. For instance, there is a well in the kitchen. Instead of getting rid of the well that is six meters deep in the process of renovation, he kept it as it is. It’s fun to stare down into the depths of the well, but in the winter it functions as a natural humidifier.

The closet doors are decorated with Buddhist paintings - paintings placed at the altars of Buddhist temples. The walls are decorated with items like dragons and phoenix that used to decorate funeral biers. “I just wanted this place to be more special and fun than average Korean residences, which are apartments.”

Word spread over time, and more and more people wanted to get a glimpse into Damdamgak. That is why he founded the Ganghwa Hanok Culture Research Center last year, with which he has been sharing his know-how in building and renovating hanok as well as promoting traditional housing in modern Korea.

In the hope that more people will get to experience the hanok up close and personal, he is opening part of the Damdamgak as a hanok hotel. Excluding Yeongbingwan, the guesthouse, all structures can be rented for a night.

The reporter said that amid his many titles, “hanok expert” may be the most befitting. But Ji shook his head. “It takes time for your ear to get accustomed to classical music. Just like that, it takes time to know everything about hanok, I think. I still have a lot to learn.”