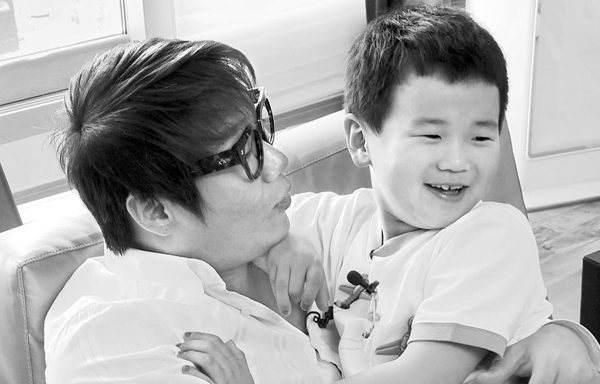 Yun Hu and his father, singer Yun Min-su of music duo Vibe, show some affection on “Dad, Where Are You Going?” which airs on Sunday nights. [JoongAng Ilbo]

In the recent years, outdoor reality programs have grown more popular, supported by the success of “1 Night 2 Days” on KBS and “Infinite Challenge” on MBC. The trend has spawned numerous sister programs that invite celebrities to participate in outdoor activities like camping and hiking.

But a new genre is also emerging among popular shows: entertainment programs that candidly portray the lives of celebrities.

Audiences are increasingly enjoying a quick peek into the private lives of their favorite celebrities while also getting to know some new faces that don’t typically appear on television.

“Dad, Where Are You Going?” shows fathers bonding with their children, breaking the stereotype that mothers are the primary caretakers for young ones.

Yun Hu, the son of singer Yun Min-su of male duo Vibe, has not only made himself a star but also put his previously unknown father on the map.

“The shows demonstrate the changes in male identity as fathers are getting ready to communicate with their children in ways previously reserved for mothers,” said Prof. Yoon Tae-jin of Yonsei University.

Audiences enjoy watching Yun’s efforts to restore his relationship with his son, which faltered since he was often working to financially support his family. The program attracted 16.1 percent of viewers in its time slot, the highest among programs aired.

The fame gained from the program has made the family more financial stable as the son has filmed a commercial for instant noodles.

Many other programs, including MBC’s “Real Man” and “I Live Alone,” have also become the talk of the town, even without commonly featured entertainers like Yoo Jae-suk or Kang Ho-dong to boost viewership.

“Real Man” depicts what men experience inside military boot camps, while “I Live Alone” broadcasts the daily life of celebrities at home via self-installed cameras.

Australian comedian Sam Hammington on “Real Man” is one of the lesser known celebrities who garnered sudden attention through entertainment shows. As a foreigner, he is not accustomed to the Korean military system he experiences on the reality show.

“Compared to dramas, the birth of these entertainment stars comes quickly, like a miracle of the moment,” said Son Byung-woo, a professor at Chungnam National University.

Another upcoming show, “Grandfather Over Flower” on cable channel TvN, takes veteran actors on backpacking trips to show the softer side of men.

It is speculated that the rise of men-heavy reality shows is fueled by fans’ enjoyment of unscripted moments on television. In “I Live Alone,” cameras are set up even in the bedroom, which means that celebrities even have a hard time finding a place to fart in their own homes.

Industry experts say that such shows could come as a burden to female celebrities, who strive to maintain a ladylike image on air.