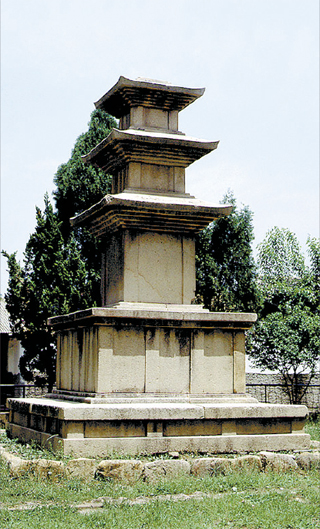 This pagoda is graceful enough to be compared with the Three-story Stone Pagoda in Bulguksa Temple (National Treasure No. 33). It is presumed that such Buddhist relics exist because of the influence of Changnyeong in the Silla Dynasty.

The three-story pagoda body stands on a two-story platform, which was common in stone pagodas in the Unified Silla Dynasty. The roof stone is horizontal but the four corners are a little raised, making a simple figure.

In 1965, when the pagoda was rebuilt, some relics such as a bronze cup-shaped sarira casket with a lid from the three-story core were found. It was also revealed then that there were surrounding stones around the bottom stone.