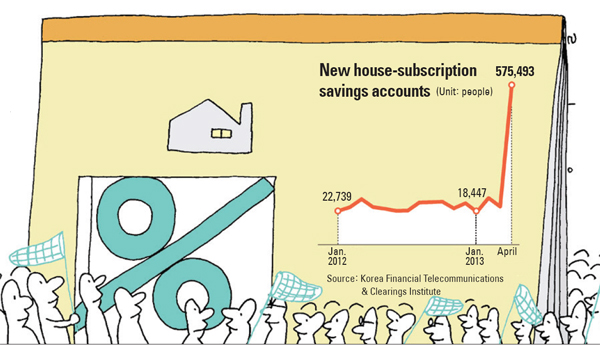 A 35-year-old homemaker surnamed Hwang was faced with many financial options recently when her fixed deposit bank account reached its three-year maturity last month. After much consideration about which financial product she should sign up for to maximize interest, Hwang decided to apply for the so-called house-subscription savings account that she had stopped adding to several months after she opened the bankbook in 2010.

The interest rate of the house-subscription savings account (4 percent) is higher than the average for fixed deposit bank accounts.

“Three to four years ago, the interest rate was much higher for fixed deposit accounts, but now it’s the opposite,” Hwang said. “I plan to put in up to 15 million won [$13,427] which is the maximum you can put in at once.”

Amid the trend of low interest rate offerings by local banks to depositors, house-subscription savings accounts are regaining spotlight as a popular investment strategy among investors hoping to reap higher profits.

House-subscription savings account products were introduced in 2009 by the Land Ministry with Industrial Bank of Korea and Nonghyup, Shinhan, Woori and Hana banks to help individuals qualify and receive priority when applying to purchase new public and private housing. With the sluggish real estate market, however, many subscribers had stopped paying into the account thinking they wouldn’t be able to make profit by investing in the housing industry.

With a surge in the number of subscribers, the Ministry of Land, Infrastructure and Transport is considering lowering the interest rate of house-subscription savings account products.

According to the Land Ministry and the Korea Financial Telecommunications and Clearings Institute on Monday, as of end of April, the accumulated number of people who have house-subscription accounts reached 12.5 million. In April alone, a total of 575,000 Koreans newly opened accounts.

Considering that the average number of new monthly subscribers from January 2012 to March was about 45,000, the number of newly joined subscribers jumped tenfold in just one month. The overall balance of deposits remaining in the accounts also increased by 1 trillion won as of end of April compared to the previous month from 21.12 trillion won to 22.19 trillion won.

“Money is flowed into where people are able to receive more interest at a time when the low interest rate trend is expected to be long-term,” said Paek Won-sun, professor at Sungkyunkwan University. “Smart investors are eyeing the product because [house-subscription savings accounts] offer higher interest than fixed deposits and they also offer an income tax deduction at the end of the year.”

With the rising popularity of house-subscription savings products, Kookmin Bank joined selling the account along with the five other banks.

“More attention is being given to the house-subscriptions savings account product after we joined the market,” said Yoo Jung-yoon, an official from Kookmin Bank. “There are some customers that put in 10 million won all at once as an alternative to a fixed deposit product.”

House-subscription savings accounts were first introduced in the form of an installment savings account in which individuals put in up to 500,000 won per month. Currently, however, it is also possible to put in money in a deposit form and newly subscribed individuals can put in up to 15 million won in chunk and separately put in additional 500,000 won in a monthly installment form for two years. This makes it possible for an individual to invest up to 27 million won and make profit based on an annual interest rate of 4 percent.

Since there are no age restrictions, a family of four can invest up to 108 million won over two years.