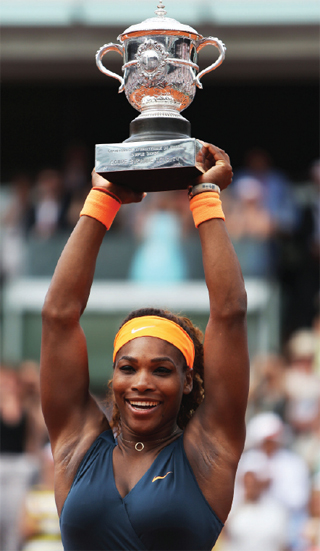 Serena Williams holds up the trophy after winning the women’s singles final against Maria Sharapova at the French Open on Saturday. [XINHUA/NEWSIS]

PARIS - Serena Williams knew, of course, that 11 years had passed since her only French Open championship.

She also knew, of course, what happened a year ago in Paris: the only first-round Grand Slam loss of her career, to a woman ranked outside the top 100, no less.

Eager to repeat the elation of 2002, and motivated by the disappointment of 2012, Williams used terrific defense and her usual powerful hitting in Saturday’s final, closing with a crescendo of aces - three in the last game - for a 6-4, 6-4 victory over defending champion Maria Sharapova to collect a second Roland Garros title and 16th major trophy overall.

“I’m still a little bit upset about that loss last year,” the No. 1-ranked Williams said with a chuckle, her shiny new hardware an arm’s length away.

“But it’s all about, for me, how you recover,” she continued. “I think I’ve always said a champion isn’t about how much they win, but it’s about how they recover from their downs, whether it’s an injury or whether it’s a loss.”

As she spoke those last few words, her voice choked and her eyes welled with tears. There have been low moments for the 31-year-old American - none worse, perhaps, than a 10-month stretch ending in 2011 that included two foot operations and treatment for blood clots in her lungs - but she’s enjoying a high point right now.

Saturday’s victory was her 31st in a row, the longest single-season streak in 13 years. Williams is 43-2 with six titles this season.

“She is playing extremely well,” Sharapova said. “She’s a competitor.”

Sharapova is known for her grit on a court, too. She entered Saturday ranked No. 2, the winner of her last 13 French Open matches, and the only active woman other than the Williams sisters with more than two Grand Slam titles. But she doesn’t seem to stand a chance against Serena, who has won their last 13 encounters.

This was the first major final between women ranked 1-2 in more than nine years - the first at Roland Garros in 18 - and yet it really was not all that close. Particularly at crunch time.

Williams hadn’t been back to the final in Paris since beating her sister for the 2002 title. From 2003-11, she lost in the semifinals once, the quarterfinals four times, the third round once and missed the tournament three times because of injury. Then came last year: Williams was 17-0 on clay when she arrived in France, then quickly 17-1.

“She was so devastated by that,” said her mother, Oracene Price.

Soon after, Williams began practicing at Mouratoglou’s tennis academy. And however demoralizing that loss was, it turned out to be career rejuvenating. Since then, Williams is 74-3 and has won three of the last four Grand Slam tournaments.

She is the oldest woman to win the French Open in at least 45 years, and the oldest at any Grand Slam since Martina Navratilova was 33 at Wimbledon in 1990. “I really believe age is a number at this point, because I have never felt so fit. I feel great. I look great,” she said, laughing at her own joke. “If I see someone that’s 31, I’m like, ‘You’re old.’ Then I’m like, ‘I’m 31.’ But I don’t feel it at all.”