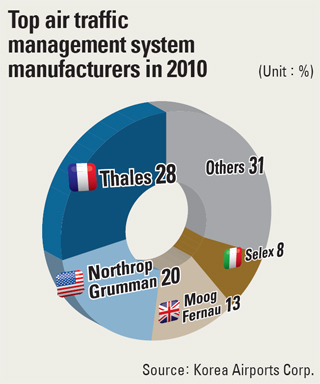 When chief of the R&D center of Korea Airports Corporation (KAC), Kim Byeong-no, heard his friend Roh’s voice over the phone, he couldn’t believe it. It was just about week ago when Kim handed 14 burnt-out modules to his friend, who ran small factory in Cheonggyechheon, central Seoul, to fix them.

In 2000, Gimpo International Airport saw its core equipment module burnt down due to a lightning strike. Kim, who was then managing radar facilities at the airport as head of the radiolocation division, was devastated when he heard from foreign air traffic management system manufacturers that it would cost 5 million won ($4,505) to 80 million won per module and take several months.

The airport faced the possibility of shutting down, and the clock was ticking.

Kim visited Roh, his Kwangwoon Electronics Technical High School alumnus, as a last resort. The 56-year-old Kim earned an MBA later, but when he began his career in 1976 he was a high school graduate and ordinary government employee.

In the past, many talented students attended technical-learning high schools and got jobs right away. Kim recalled that those in Cheonggyecheon had very good technique. For example, they replicated the Sony Walkman just days after it was released.

When Kim sent his employees to Roh to fix the burnt module in 2000, he told the JoongAng Ilbo that he didn’t expect much, but he received good news just a week after. Kim was overjoyed and tried to compensate his friend Roh more than the 500,000 won charged.

But after the incident, Kim felt something was wrong because the KAC had been paying more than 10 times that to fix modules that could be handled in Cheonggyecheon from civil engineers like his friend.

This was when Kim began to pursue his dream of localizing air traffic equipment, and it wasn’t a walk in the park.

After moving to his position as manager of the Civil Engineering Training Center, he asked each airport to send all broken modules to the center. At that time, he sent three employees to Roh’s shop to learn repair skills and techniques. All three were college graduates and Class I engineers. After six months of training, they were able to repair 70 percent of the modules.

With such results, Kim believed localization of air traffic system parts could succeed and made a proposal to higher executives. But nothing was done until 2003, when former KAC President Yoon Ung-sup embraced the project.

After a year, the first Korean-made DVOR was produced in 2004. Using Korea’s advanced IT technology, it was digital-based equipment. Compared to an analog device, it produced less heat and was cheaper to make. Since it benchmarked from the world’s top five products, the quality was world-class.

However, selling the device was a different matter. To sell an air traffic control system, there needs to be a record of installation and operation at the airport for at least five years. KAC President Sung Si-chul, then head of the management division, visited the then Ministry of Construction & Transportation (now Ministry of Land, Infrastructure and Transport) many times to persuade officials to test it. When the KAC’s DVOR proved to be better than foreign products, it was approved to be installed at Gimhae Airport.

Selling the product in other countries was much more difficult. From 2006, the KAC entered bids for Turkish airports but was rejected three straight times because it couldn’t meet the five-year operation requirement.

After much consideration, Kim found a way out through Korea’s Economic Development Cooperation Fund. The supporting project for developing countries not only includes cash injections, but upgrading infrastructure.

By looking through EDCF’s project lists, Kim found construction scheduled of Laguindingan Airport in Mindanao, Philippines. Originally, the Philippines government was going to use air traffic control devices from Norway.

But this time, many officials and agencies pitched in, including Korean Ambassador to the Philippines Choi Joong-kyung, former minister of knowledge economy; the Korea Eximbank; Korea Trade-Investment Promotion Agency; and Korea International Cooperation Agency. Chung Jong-hwan, who was then Korea’s land and transport minister, even wrote a letter of guarantee to the Philippine government, and the Korean-made DVOR was finally accepted.

From there, the export of local air traffic management devices started to take off. In 2010, they finally entered the Turkish market. Kim said that he persuaded buyers by saying that KAC’s air traffic control device needs to be accurate because if there were a problem, a South Korean aircraft could violate North Korea’s airspace.

Since then, Korea has won orders from Turkey for four straight years. Last month, it beat Frances’ Thales Group, the world’s No. 1 manufacturer of air traffic management systems, to win orders worth a total of $2.9 million to install devices at six airports in Turkey worth $2.9 million. Fifteen Turkish airports now have Korean-made air control devices.

In particular, KAC wants to be a leader in automatic dependent surveillance-broadcast (ADS-B), a GPS technology for tracking aircraft widely seen as a next generation system.

KAC so far has sold 205 devices to 16 countries and earned 35.8 billion won. It’s a good start, but KAC aims to have annual sales of 134.2 billion won by 2020 and step up as the world’s third-largest air control device manufacturer with a 15 percent market share. Industry insiders said the air traffic control market is estimated to be 4.2 trillion won annually and growing.

Although, some people say that KAC’s goal may be too ambitious, Kim, the man who started it all doesn’t agree.

“Our sales goal is conservative and, personally, I think we can achieve three times the targeted goal,” Kim said. “We started from nothing and had to come from behind, but for next generation air traffic management system we want to be the leader in development. That’s our ultimate goal.”