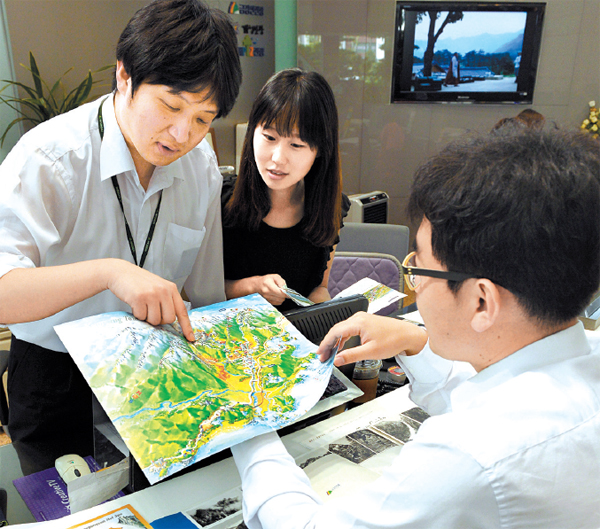 Hyundai Asan, the affiliate of Hyundai Group that conducted Mount Kumgang tours in North Korea, is hoping that its businesses may see a revival after five years, following the South Korean government’s acceptance of North Korea’s proposal to hold ministerial-level talks regarding halted inter-Korean business.

“It depends on the result of inter-Korean talks, but if an agreement is made, we expect to resume Mount Kumgang tourism businesses within two months,” an official from Hyundai Asan said. “Before reopening the business, we need to beef up our work forces and check facilities there.”

Hyundai Asan hopes to regain its exclusive right to develop Mount Kumgang area for 50 years, which North Korea revoked in 2011.

Hyundai’s business in North Korea took off in 1998 when late group founder Chung Ju-yung signed a deal with North Korea to develop the Mount Kumgang area. A passenger ship landed at Jangjeon Port in North Korea, and in 2003, the port was accessible by bus. In March 2008, tourists were allowed to drive cars to North Korea’s second-tallest mountain.

However, all tourist activity stopped after July 11, 2008, when South Korean tourist Park Wang-ja was fatally shot by a North Korean soldier after she entered an off-limits military zone at a beach in Jangjeon Port.

Hyundai Group Chairwoman Hyun Jeong-eun met with North Korean leader Kim Jong-il in 2009 and said she got a verbal promise from Kim regarding the safety of tourists, but the South Korean government denied Hyundai Asan’s attempt to resume business, saying there was no agreement between the two governments.

North Korea later expropriated some assets owned by the South Korean government and Hyundai Asan, such as duty free shops, a visitors’ center, fire stations, and operated the tourism business on its own. However, sources report that the North’s tourism business is lower compared to when Hyundai Asan was in charge.

Hyundai Asan said its estimated damage for not operating the Mount Kumgang tour business since 2008 is more than 500 billion won ($447 million). ?

Hyundai Asan said that it will wrap up the first phase of development, which is to cultivate land for companies to build a plant, if the two Koreas reach an agreement. Originally, 300 companies were to set up factories there, but less than half of them have been completed. For the second phase, the company aims to develop commercial and residential areas.