Power gaps are part of a gov’t numbers game

Power gaps are part of a gov’t numbers game 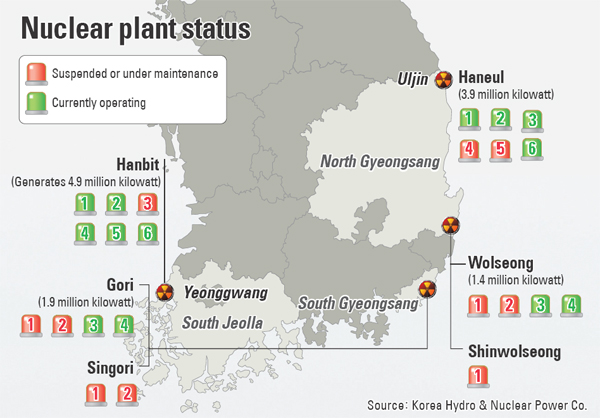 After Korea experienced an unprecedented power blackout in September 2011, people have been living under the threat of possible power cuts every summer and even in some winters. This summer is the diciest yet, with a heat wave blanketing the nation in early June and four nuclear reactors flicked off after some of their parts were found to be substandard and with fabricated safety inspection certificates.

This has caused the nation’s power distributor to issue warnings of power shortages five times this summer already.

The government blames unexpectedly hot weather whenever the power reserves dip into dangerous territories. But the heat doesn’t surprise the average Korean. Why does it keep surprising government bureaus responsible for staying ahead of the heat and keeping the juice flowing?

Out of Korea’s 23 nuclear reactors, the government felt comfortable going into summer with 15 reactors operating. But then two reactors near Busan were shut down because of faulty parts with fabricated certificates two weeks ago, and two additional brand new reactors in the same complexes were not allowed to start operating for the same reason. So now the country only has 13 operating. 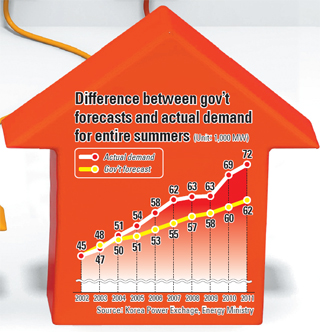 The Nuclear Safety and Security Commission said yesterday it allowed resumption of the Hanbit reactor 3 located in Yeonggwang, South Jeolla, which has been under inspection since last October. The reactor was halted due to a defect in the main part of the reactor.

With the operation of the Hanbit 3, Korea will have a total of 14 nuclear reactors in operation this summer, unless more reactors get shut down.

But the government’s low-ball estimates of demand are another big problem.

Since 2000, the government has set a goal of energy conservation that focuses on encouraging people and businesses to reduce electricity use than ensuring them their right to power 24/7. A fundamental cause of the current power supply problem is unrealistic power demand predictions by the government.

The Ministry of Trade, Industry and Energy establishes a plan for power supply and demand every two years. The Energy Ministry projected in 2006 that the country’s highest power demand would be 67.12 million kilowatts in 2012.

The actual demand last year turned out to be 74.29 million kilowatts, about 7.17 million kilowatts or 10 percent higher than the government’s forecast. The surplus is equivalent to the total output of seven nuclear power plants.

In 2008, the Energy Ministry raised the prediction to 72.96 million kilowatts, but it also fell short of the actual amount required.

“The government is making overly low forecasts because it wants to move in a policy direction aimed at reducing power consumption rather than supplying enough power for people,” said Lee Won-hee, a research fellow at Samsung Economic Research Institute.

“Our society is becoming more electricity-reliant as it develops, so it is inevitable to see power use rise even if efficiency is improved,” he said. “The government should change its policy director rather than sticking to its unrealistic plan.”

Like the government-led promotion of electric vehicles, there will be more consumer goods and large IT centers that require significant amounts of new power in the near future, Lee said.

“The government needs to consider these things and come up with a new plan for power supply and demand,” he added.

Korea’s growth trajectory has followed the development of its heavy industries, which has required the government to set supply-side plans in power distribution. But as the country is moving toward an IT-based society, the focus of the plan should be changed, critics say.

Another factor that has kept demand predictions low for a long time is collusion among the country’s power generators in the wholesale market. The generators - six in the public sector and a few in the private sector - make more profit when wholesale prices climb as supply gets tighter. So, they benefit from making low demand forecasts in order to raise wholesale prices when supplies get tight.

The fact that there is a lone retail power seller, the Korea Electric Power Corporation (Kepco), doesn’t help either. Kepco buys power from the generators at negotiated prices. If there were multiple retailers in the local market, the retailers might have bigger negotiating power to decide on wholesale prices of electricity.

“In this sense, we can reach a conclusion that there needs to be competition in the local electricity market so exact predictions of demand determine the profits of multiple market players,” the KDI’s Lee said. “And to make reliable demand predictions, there needs to be an empowered, nongovernmental body taking charge of power demand forecasting and monitoring.”?

The Korea Power Exchange is currently commissioning some of its demand forecasting work to an outside institute for better results, but Lee argued the institute should play a bigger role.

“Rather than a voluntary or academic group of researchers and professors, there should be a powerful interest group whose members are more closely linked to the forecasting job,” Lee said.

The Energy Ministry admits that the government has been too optimistic about power demand.

“The government has underestimated how much electricity needs to be produced by the generators, but the sixth plan, announced in February, would have a more accurate prediction,” said Park Seong-taek, director of the electricity industry bureau at the Energy Ministry.

For the first time, the country’s Prime Minister Chung Hong-won pledged that the government will review all test certificates of reactor components at all of the country’s 23 nuclear reactors, numbering as many as 125,000 parts certificates issued over the past five years.

The prime minister said the government will take action against crooked parts suppliers and testing agencies.