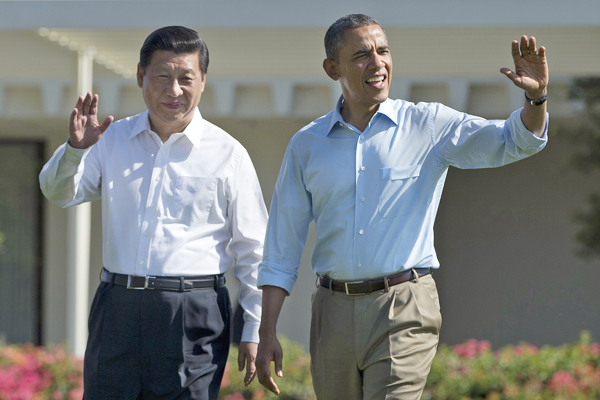 U.S. President Barack Obama and his Chinese counterpart Xi Jinping agreed on Saturday to put more pressure on North Korea to give up its nuclear weapons as they concluded their two-day summit in California on Saturday.

North Korea was one of the key issues discussed at the informal “shirt-sleeves” summit along with cybersecurity.

Tom Donilon, exiting White House national security adviser, said in a press briefing after the talks in which the two leaders “agreed that North Korea has to denuclearize, that neither country will accept North Korea as a nuclear-armed state” and that the two countries should “work together to deepen cooperation and dialogue to achieve denuclearization [of the North].”

Separately, Chinese State Councilor Yang Jiechi, a former foreign minister, said Saturday Beijing and Washington were “the same in their positions and objectives” in regards to the North Korean nuclear problem.

Donilon said, “China has taken a number of steps to send a clear message to North Korea,” following Pyongyang’s string of provocations.

After suspension of nearly all contact with South Korea, Pyongyang and Seoul held a working-level discussion yesterday ahead of the first ministerial-level meeting in six years scheduled for Wednesday.

Xi reaffirmed China’s dedication to keeping peace and stability on the Korean Peninsula while it is “ready to maintain close dialogue and cooperation” with the U.S. to realize Pyongyang’s denuclearization, Yang said.

In an unusual, informal summit held at Sunnylands retreat, the Californian desert estate of the late publishing magnate Walter Annenberg and his wife Leonore, the leaders of the world’s biggest superpowers worked through a number of issues over eight hours of talks over Friday and Saturday.

Yang said the two “did not shy away from differences” in their discussions. The two sides reached an understanding in terms of how to rein in Pyongyang’s nuclear ambitions, trade and investment liberalization and how to confront global climate change, including reaching an agreement on reducing emissions of the so-called super greenhouse gases by cutting down the use of hydrofluorocarbons, found in refrigerators and air-conditioners.

However, they remained at odds regarding the forefront issue of the summit, cybersecurity, as Obama pushed Xi to address hacker attacks and online theft of U.S. intellectual properties out of China.

“The president underscored that resolving this issue [of cyber-enabled economic theft] was really key to future economic U.S.-China relations,” Donilon told reporters Saturday, stating that suspected Chinese cyberattacks on U.S. military and businesses would be an “inhibitor” to relations. He said that Xi “acknowledged” the importance of the issue to Washington.

China also urged the United States to halt its arm sales to Taiwan.

“China and the United States must find a new path,” Xi stated on Friday, “one that is different from the inevitable confrontation and conflict between the major countries of the past.”

Xi and Obama also took a one-on-one, 50-minute stroll accompanied only by interpreters on Saturday. Xi invited Obama to pay a return informal visit to China, though no date has yet been set, while Obama presented Xi with a bench made out of Californian redwood as a parting gift. The White House said that the informal venue provided an atmosphere for the two leaders to develop a personal rapport.