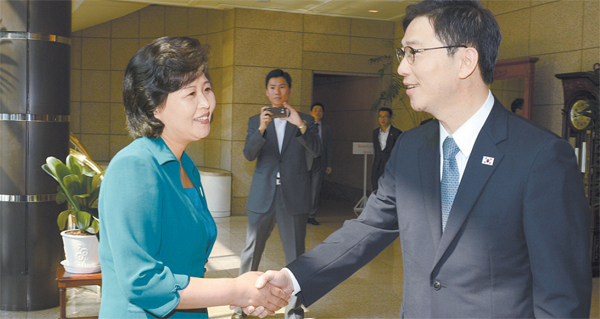 South Korea’s chief negotiator Chun Hae-sung, right, shakes hands with his North Korean counterpart Kim Song-hye ahead of their meeting at the truce village of Panmunjom. The two Koreas met yesterday to set ground rules for the inter-Korean ministerial talks in Seoul on Wednesday. [NEWSIS]

North Korea will send a senior delegation to Seoul this week for inter-Korean ministerial talks Wednesday, restoring higher-level dialogue between the two Koreas for the first time in six years.

The two Koreas yesterday held talks at the truce village of Panmunjom at the border to lay the ground rules for the ministerial meeting.

While they agreed to hold the higher-level talks in Seoul on Wednesday, the negotiations continued as of 7:30 p.m. to finalize the details.

After Pyongyang proposed talks Thursday to discuss resurrecting the inter-Korean Kaesong Industrial Complex and Mount Kumgang tour, Seoul responded with a plan to hold a ministerial meeting in Seoul Wednesday.

Seoul’s Unification Ministry spokesman Kim Hyung-suk said yesterday the two Koreas had smooth negotiations, noting that “no argument was seen during the morning session” as inter-Korean contacts were finally restored after years of deadlock and frosty relations.

According to Kim, the two sides reached consensus on having the ministerial meeting in Seoul on Wednesday.

“Through opening remarks, the chief negotiators each presented their positions on the agendas for the ministerial talks and other technical and administrative issues such as the venue, date, size of the delegation, period of trip and transportation route,” Kim said. “And then they discussed the specific arrangements.”

The morning session took place from 10:15 a.m. to 11 a.m. and four more sessions with recesses between followed in the afternoon.

According to the ministry, the two sides exchanged their suggested wordings of how to announce the outcome of the talks in the evening.

More negotiations to finalize the agenda of the Seoul meeting and how long the North Korean delegation will stay were to continue into the night, the ministry said.

The South Korean delegation was led by Chun Hae-sung, head of the unification policy office at the Ministry of Unification, while the North sent Kim Song-hye, a senior official from the Committee for the Peaceful Reunification of the Fatherland, as its chief negotiator. Both of them were accompanied by two officials each.

Yesterday’s talks were the first government contact between the two Koreas in two years and four months. The relationship between Seoul and Pyongyang worsened severely during the presidency of Lee Myung-bak, the predecessor of South Korean President Park Geun-hye.

The upcoming ministerial talks will be the 22nd of their kind. The 21st meeting took place in Seoul in 2007, and none took place during the Lee administration.

It remains to be seen whom Pyongyang will send to Seoul for Wednesday’s meeting as the counterpart of Unification Minister Ryoo Kihl-jae. Seoul hopes to see Kim Yang-gon, director of the United Front Department of the North’s ruling Workers’ Party, since he is technically the counterpart of Ryoo.

Because the ministerial meeting will address a wide range of sensitive issues such as normalizing the operation of the Kaesong Industrial Complex, resuming the Mount Kumgang tour program and holding reunions of separated families, the South has pressured the North to send Kim, who is considered to have enough authority to make substantive decisions. The South sent a message addressed to Kim last week in an effort to encourage his participation.

When the North withdrew all of its 53,000 workers from the Kaesong factories in April, effectively paralyzing its operation, Kim made a visit to the industrial park and announced the decision.

Since 2007, Kim served as the United Front Department director, overseeing all South Korea affairs. But when the two Koreas had its last ministerial talks that year, the North sent a lower-level negotiator, not Kim, and the meeting ended with no agreement.