20,000 fans rock away the weekend on Nami Island

20,000 fans rock away the weekend on Nami Island 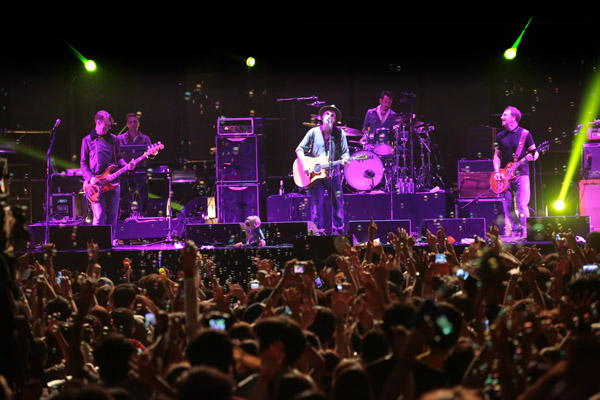 Camping is usually banned on this privately owned island, but there is one exception: the Rainbow Island Music & Camping Festival. The event’s third year kicked off on Friday, and popular groups like headliner British rock band Travis performed over three days.

Upon arrival, male visitors showed off their muscles by pitching tents, while girls gazed in amusement. Some men were witnessed doing unnecessary stripping to the waist.

“I love camping and my girlfriend loves the bands that are coming for this year’s festival,” said Yang Jin-gu, 26, who says he’s come to the festival every year. “This year, I brought a lot of things to eat with my girlfriend because food tends to be a little expensive here.”

Another visitor complained about the electronic coin system to pay for food and drinks.

“I downloaded the festival app and bought 50,000 won [$44] worth of coins for food and drinks, but my phone battery ran out on the second day as there’s no electricity on the island except at a designated place that’s really far from my tent or in the restroom,” said Park Min-jeong, 32, from Seoul. “I had to charge it for about five minutes at the restroom to buy a meal on the second day.”

But except for the high food prices - a pack of fries was 4,000 won - and the inconvenient payment system, visitors seemed to enjoy the festival and the sunny weather.

The festival was Travis’ third visit to Korea, and the group was again greeted by thousands of Korean fans flying paper planes as they sang “Closer.” The so-called “paper plane event,” in which Korean fans fly paper planes toward foreign artists onstage, began with Travis’ concert in 2009. Since then, other fans at foreign artists’ concerts organized similar events. Before the performance, Travis posted a photo from a previous concert in Korea, in which fans were seen flying paper planes, to express how much they were looking forward to the Nami Island concert.

“You’ll never imagine what it’s like to see paper planes flying toward you from the audience. They are just beautiful,” said Fran Healy, lead vocalist and a guitarist, as the band finished singing “Closer.” Instantly, fans began screaming and cheering.

The festival came to an end on Sunday night with a concert from Korean indie rock band Nell, and the 20,000 attendees packed their belongings to leave the island by 11 p.m.