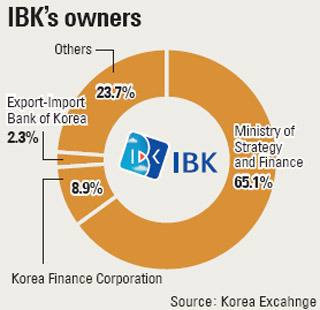 While the Park Geun-hye government is in need of resources to fund programs like greater welfare, attention is being paid to whether the Ministry of Strategy and Finance will be able to speed up selling shares it holds in the Industrial Bank of Korea (IBK).

According to IBK and government sources yesterday, officials from the institution and the finance ministry have left the country to hold an investor relations conference in three cities - New York, London, and Hong Kong - over a period of five days from yesterday.

Although the IBK holds investor relations conferences overseas regularly, it is the first time that government officials have joined. The move is seen as part of the government’s effort to drum up foreign investor sentiment in major financial hubs to push forward its sale of IBK shares.

According to Korea Exchange, the finance ministry is the main shareholder of IBK with a 65.1 percent stake, followed by the Korea Finance Corporation (8.9 percent), the Export-Import Bank of Korea (2.3 percent), and others (23.7 percent).

“The government has been trying to sell IBK shares since 2006,” said an official from the IBK. “Last year, although it failed, the government’s aim reflected in the budget was to sell shares worth 5.1 trillion won [to add to state revenues] but this year, the amount won’t be that large.”

In April, when the government announced its supplementary budget, Lee Suk-joon, second vice finance minister, hinted it was willing to let go a certain number of shares without losing management control.

“If the government sells shares but still maintains management control, we could be able to raise around 1.7 trillion won,” Lee said. The 1.7 trillion won would be used for projects pledged by President Park during her campaign.

But IBK’s stock price has fallen. In order for the government to earn 1.7 trillion won through selling shares but keeping control, the price of an IBK share should be more than 14,000 won. As of yesterday, shares were 12,050 won, up 0.84 percent from the previous closing on Friday. Market insiders note that the government will have to wait until market conditions improve so that the stock price goes up.

There are other hurdles too, such as lack of interest in a sluggish global market.

During the Lee Myung-bak government, there were efforts to sell IBK shares after criticism the government was holding on to state-owned institutions for too long.

“It’s too extreme to say that the government is trying to privatize IBK,” said an official from the finance ministry. “Rather, we’re participating in IBK’s IR conference overseas to directly answer questions from foreign investors if they are interested and to gauge the investment climate.”