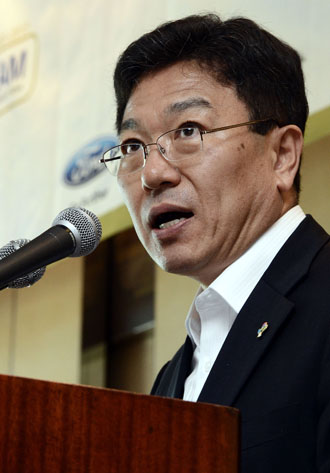 Yoon Sang-jick, minister of trade, industry and energy, said it is time to accelerate efforts to sign a free trade agreement with China and the government plans to utilize the opportunity when President Park Geun-hye visits Beijing at the end of this month.

At a press conference hosted by the American Chamber of Commerce in Seoul yesterday, Yoon said the government is aware that the FTA negotiation with China has been stalled for more than a year since the two countries launched the talks in May last year.

“We would like to use the momentum when President Park visits China to accelerate the negotiations,” Yoon said.

However, he declined to confirm whether the Korean government will participate in the Trans-Pacific Partnership negotiations or not, saying that there are many things to consider before joining such a huge economic partnership deal. The United States, Japan, Australia and New Zealand decided last year to join a group of eight countries for broader economic partnership and free trade. Korea and China aren’t yet in it.

The minister credited positive effects of the Korea-U.S. FTA, saying that the U.S. became Korea’s third-largest trading partner in 2012, moving up from fourth place in 2011.

“Over the past year, we have seen a 48-percent increase in imports of U.S. cars to Korea, and a 130-percent increase in imports of orange juice from the U.S. The U.S. products are competing fairly for the Korean consumers,” he said. Yoon encouraged American businesspeople at the conference by saying that they will be able to enjoy many benefits when they share ideas with Korean companies and establish businesses together in the country under the Park government’s creative economy initiative.

Yoon credited the “Open Market” run by eBay Korea, the product of cooperation between American e-commerce business eBay and Korean companies, as a good example of creative economy.

The minister also mentioned Foldit, a computer game developed by Washington University which uses crowd-sourcing to help develop treatments for diseases that doctors have been unable to cure.