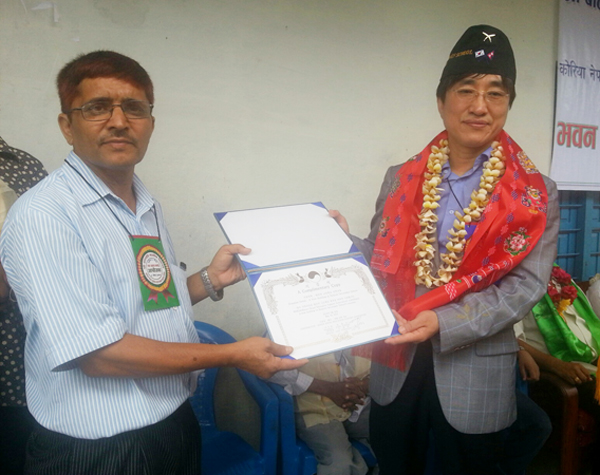 Jeong Tae-gi, head of a Korean foundation dedicated to improving education conditions in Nepal, right, is presented with an award from a Nepalese high school in Hetauda for the organization’s contributions to expanding the school last week. By Hwang Sun-yoon


“Aside from Nepal’s tourism industry as the country includes both Everest and Annapurna, there is no decent industry,” stated Jeong Tae-gi, 53, the head of a Korea and Nepal educational exchange group, Share Education Foundation. “The illiteracy rate is over 60 percent.”

“But the people have a desire for education and school teachers have a lot of passion. That rouses a fire in my heart,” said Jeong.

The foundation went on to help build a school in Nepal and three years since it was founded, it is seeing progress.

Recently, the foundation completed a project to expand a high school in Hetauda, a city in southern Nepal, located about a five-hour drive from the capital Kathmandu with a population of 80,000.

The city began to build the Baljyoti High School but ran out of funding after only completing the first floor of the building and had to halt its construction.

Thus, its students had to study in a tiny, crammed classroom.

Jeong and members of the foundation contributed 30 million won ($26,760) raised from individual donations as well as the auctioning of art pieces, to complete a second floor with six classrooms for the Nepali school.

The art pieces that were auctioned to raise money were donated by artists of the Alternative Space Maru, a nonprofit cooperative gallery supported by Jeong over the past decade.

“At first the Nepali people were doubtful and local mobsters eyeing the money tried to interfere with the construction process,” admitted Jeong. “But after five months of construction, starting from May 18, we held the ribbon-cutting ceremony for the building.”

Some 600 Nepalese gathered at the inauguration ceremony, including the mayor of Hetauda, teachers of Baljyoti, students and parents.

The foundation plans to establish a computer classroom next for the school.

Jeong stated, “We believe that sharing just a little bit can bring a difference to the livelihood of the Nepalese people and will continue to encourage sharing of education with Nepal.”