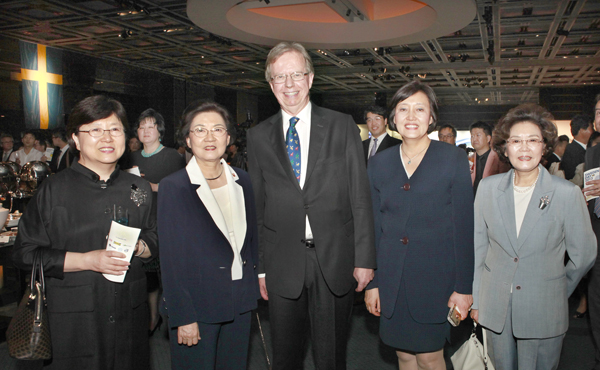 
Sweden celebrated 54 years of diplomatic ties with Korea on Thursday with a showcase of Swedish music, food, brands and a fusion fashion show organized by Korean students in central Seoul.

“We want to show the modern side of Sweden,” Ambassador Lars Danielsson told the Korea JoongAng Daily at the Grant Hyatt, “but we also want to symbolize the strong connections we have with Korea in various aspects.”

A highlight of the event was a modern fashion performance developed by the Ewha Womans University College of Arts and Design. The division of fiber and fashion collaborated with models from the graduate ballet department to put on a futuristic fashion show incorporating lights and traditional dance. Ewha is the first college in Korea to establish a fashion design course.

“I hope we were able to show modern fashion in which design meets Korean traditional dance, especially its graceful lines, to portray the beauty of Korean dance through a new fusion fashion performance,” said Lee Eun-jung, a Ewha Womans University ballet doctorate student who participated as a dancer and model at the event.

The Swedish Embassy has a close relationship with the women’s university. Last year, Queen Silvia launched a weeklong film festival at the school during a state visit with King Carl XVI Gustaf.

The Sweden Day celebration carried the theme “Carry Sweden with you,” which Lars said symbolizes that Swedish “innovations are a part of everyday life in a manner that you do not think of.”

Other events included a concert by a Swedish singer-songwriter and presentations by brands such as Ikea, a Dutch ready-to-assemble furniture company with Swedish origins, multinational clothing retailer H&M, Volvo and Absolut Vodka, which put on a cocktail flair show.

“Many people do not know, but a number of drinks available in the Korean market are packaged through Tetra Pak.” They include cartons, whether square or triangular, straw-insert packages and twist caps.

The ambassador also made some references to North-South relations at the event as this year is the 60th anniversary of the armistice that halted the Korean War in 1953.

“I’m convinced that this country will continue to flourish, and hopefully Sweden can do a little bit to assist in that,” Danielsson said.

“My hope is that we are not getting too far away from reunification, because that’s we need. But I’m sure we’re moving in the right direction.”