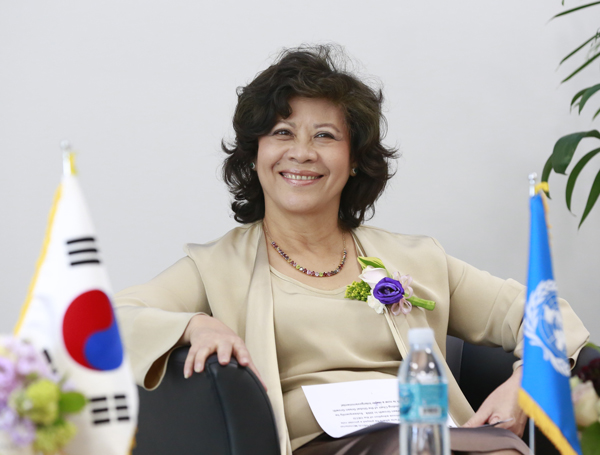 An Asia-Pacific regional development arm of the United Nations moved into its new sub-regional headquarters in the newly-built global hub of Songdo, Incheon, on May 31, heralding a new era of UN bodies in the region.

“The consolidation of UN offices in Songdo, together with newly-established international organizations such as the Green Climate Fund, will provide synergy and foster even closer partnership,” said Noeleen Heyzer, executive secretary of the United Nations Economic and Social Commission for Asia and the Pacific (Unescap), in a recent interview with the Korea JoongAng Daily.

Unescap, headquartered in Bangkok, Thailand, first opened its East and Northeast Asia branch, one of five sub-regions under the commission, in Songdo in 2010, on the Korean government’s invitation.

The move of the subregional office into the I-Tower last month was expected as the central Songdo skyscraper was fashioning itself as a new UN premises and will also be home to the secretariat of Green Climate Fund - described as the environmental World Bank - set to move into the building later this year.

The UN Asia and Pacific Training Center for Information and Communication Technology for Development, the UN Commission on International Trade Law and the UN International Strategy for Disaster Reduction are also set to open offices in the building.

“At the time of inauguration in 2010, Incheon City was already planning to build the I-Tower to house international organizations,” Heyzer said. “Given our economic, social and environmental challenges, cooperation and partnership are critical for us to move forward both regionally and globally.”

The opening ceremony for the office was attended by Heyzer, the heads of the UN organizations, diplomats, Korean government officials and Incheon Mayor Song Young-gil.

Heyzer, appointed by UN Secretary General Ban Ki-moon in 2007, is the first female chief of the 62-member Unescap, which was founded in 1947.

When she was appointed she said the organization will only be as strong and effective as its member states decide it to be.

“Five years later, I am proud to say that we have never been stronger. Our member states have turned the Unescap intergovernmental platform into the largest and most inclusive decision-making table for the Asia-Pacific region.”

In response to the ongoing tension in Northeast Asia especially in regards to historical and territorial disputes, she said, “there can be no prosperity without peace and there can be no peace without development, which is why it is critical that points of tension are quickly resolved though dialogue which builds on common ground and the larger interests of the people of our region.”

Heyzer, a gender equality advocate, previously served as the head of the United Nations Development Fund for Women (Unifem), and has worked extensively to promote the empowerment and security of women.

“When I was the head of Unifem I put the issue of ending violence against women high on the United Nations agenda. The adoption of UN Security Council Resolution 1325 directly addressed the issue of sexual violence as a weapon of war that must be stopped.”

In 2008, secretary general Ban Ki-moon launched the UN’s Unite campaign to stop all forms of violence against women.

Heyzer said that in order to prevent stigmatization of such women that, “it is also worth noting that immediately after the Fourth World Conference on Women, in 1995, the Government of Japan worked with me to establish the UN Trust Fund to End Violence Against Women, and I encourage their government to continue on this path with us.

“Peace and security are critical to preserve the unprecedented economic growth that we have seen in our region,” she said.

She also addressed other difficulties faced in the region, including increasing inequality within and between countries, which could undermine social cohesion and stability, intense competition for natural resources, climate change and weak governance.

The office in Songdo currently has a staff of more than 20 people dedicated to boosting multilateral cooperation in East and Northeast Asia.

“Working with the Incheon Municipality, and the Korean government, we hope to scale-up our already significant presence in Korea, to better serve the people of this sub-region,” Heyzer said.