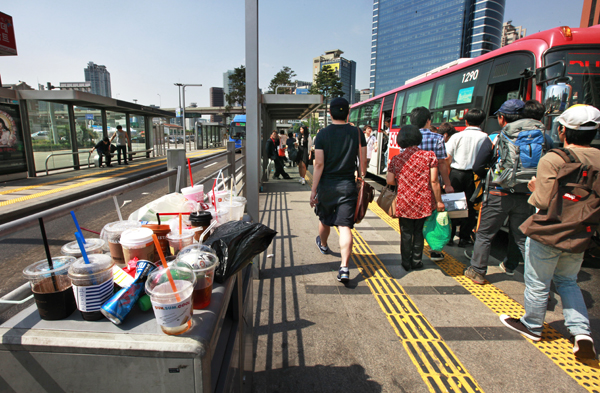 Coffee and plastic cups make up 80 percent of trash found on the streets, according a Seoul Metropolitan Government official. By Park Sang-moon 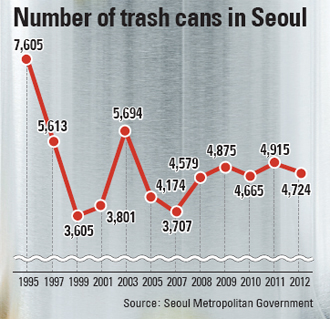 It’s a Saturday night and outside exit 9 of Hongik University Station there is a throng of people trying to get in and out. Wedged between are plastic cups of all shapes, sizes and colors.

Travel down the same subway line to Euljiro 1-ga, and in Myeong-dong it’s a similar story, albeit with more varied trash, from wooden spikes with bits of potato to discount flyers.

Look up and there are befuddled shoppers with coffee cups in hand, looking around frantically and wondering, “Where should I put the garbage?”

And this is not just a Myeong-dong issue. The lack of trash cans is a common frustration for people in all parts of Seoul.

Business owners are also affected, as are those cleaning up the filth discarded on the streets.

One worker from a chain family restaurant says that on an hourly basis, it’s standard for staff to patrol outside the building to dispose of any trash that’s accumulated as people walk by.

“From things like night club flyers to leftover beverages and cigarette butts, we have to clean it all because the city cleaners only come early in the morning,” said a vexed worker.

A clerk from the 7-Eleven store at the corner of a crowded area tells a similar tale.

“People just dump all their rubbish on top of our fridge,” said Lee A-reum. “We tried to remedy the situation by putting a box outside, but it fills up too quickly, so we stopped.”

Everyone seems to agree that there should be more trash cans as Korea becomes an international tourist spot; last year the nation hit the 11.1 million mark in terms of visitors. But when it comes to street-side waste management, it seems the city and the people are failing to see eye to eye.

Currently there are some 4,700 trash cans on the streets of Seoul, although they seem to be nowhere in sight when you are in need of one. Over the years, this number has actually declined; in the mid 1990s, there were 7,606 cans.

“A lot of businesses and locals near trash cans will often use them to dispose of their own garbage,” explained Jang Dong-eun, a worker at the environment management division of the Seoul Metropolitan Government.

Since the city began requiring residents to purchase special trash bags, many have apparently tried to game the system.

But illegal dumping aside, Kim said it’s also the locals who should know better when it comes to littering.

“It has to do with basic human psychology. When a person approaches a trash can and sees something blocking the opening, instead of pushing through they’ll just place their garbage on top as to not touch it,” said Kim, who added that often the trash cans are collected at less than full capacity, while the area surrounding the can turns into an impromptu dump. 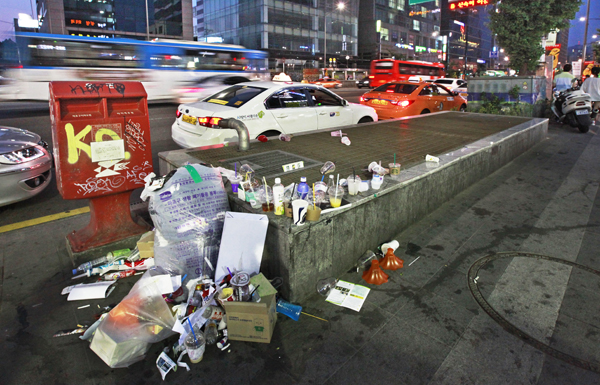 “We are encouraging people to leave their trash in the shops as opposed to carrying it out,” said the cleaning department’s operations manager, who maintains that since doing away with most of the trash cans in June last year, “the streets are markedly cleaner.”

But this doesn’t really help the situation for those on the go.

“We know it’s kind of silly to ask people to put dirty coffee cups back in their handbags until they get home or to work,” said Kim.

Are coffee shops to blame?

“I’d say 80 percent of the stuff that people dump on the streets are plastic cups, coffee cups and PET bottles from convenience stores,” said Jang.

It’s because of the nature of the trash that Seoul Metropolitan government toyed with the idea of asking convenience stores and coffee retailers to help out? with cleaning up.

“They didn’t really like the idea,” said Jang. “They are of the opinion that they pay taxes, so why should they fork over more money?”

But Kim said that in Japan, each convenience store offers a waste disposal unit outside the store regardless of where the trash originates, and he is hoping for some sort of a resolution soon.

“Retailers are quick to blame citizens for littering, but they are not really helping the situation,” said Jang, who thinks a dose of corporate responsibility is in order. As Seoul city government tries to get businesses on board, one of the largest coffee chains in the country, Starbucks, says it is doing its bit to help the situation.

“We know there is a problem, and to ease the situation, we do ask our patrons if they’d rather use mugs so that the rubbish does stay in the store,” said a spokesperson from the company. But because that’s not a foolproof solution. In high-traffic areas, it is up to the store workers to monitor the building’s surroundings. The trash that accumulates outside shops is one of those grey areas where people are quick to pass the buck. 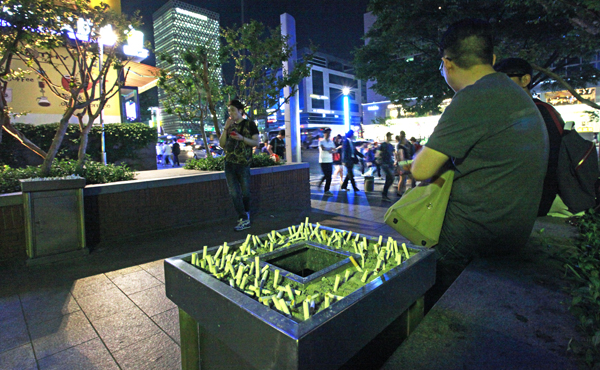 While the best solution seems to be as simple as installing more trash cans, the matter is complicated because the Seoul Metropolitan Government cannot control each district’s spending on waste management. Often, the city government and districts have different opinions.

As each municipality is responsible for buying and maintaining its own waste cans, there is only so much pressure that the Seoul Metropolitan Government can exert on districts. To complicate matters, there are also no universal guidelines on how many bins there should be per block.

“So for a 100 trash cans, the tally would be around 200 million won,” he said on why the districts are reluctant to install more cans. “Ten years ago, it was a different story, but now that the general trash situation has improved, the money goes to more urgent problems.” 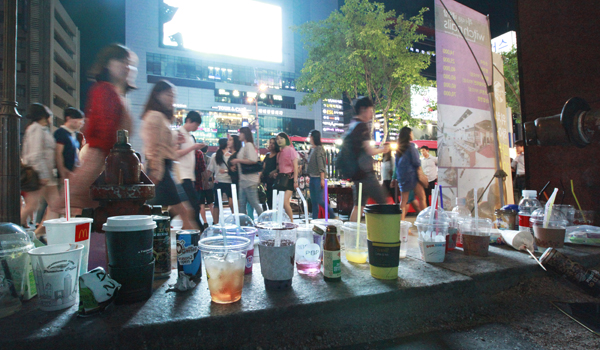 A new way of looking at trash

With retailers and governments failing to see eye-to-eye, the solution may actually come in another format altogether.

The solution to all this may lie in the actual design of the trash cans.

“Often the problem is that the opening is too small, people don’t push their garbage all the way through, and once something is stuck in the opening, everyone starts putting their garbage around the can,” said Kim.

The director said cleaners often complain that cleaning up around the vicinity of the waste can take more time than actually emptying a can.

“And once a person puts down a beverage, everyone else seems to follow their lead,” said a cleaner who works at a building in Myeong-dong, claiming that in the early morning, it takes hours to clean up those items placed on the floor and on benches.

Kim said that the government did advise district offices to purchase trash cans with bigger openings. It was hoped that these trash cans would spruce up the city with their unique design, not to mention the usefulness of the wide opening.

“But the districts didn’t want that because they didn’t want locals using it to dispose of their commercial or household garbage.”

But as citizens’ habits have, according to Kim, improved since the 1990s, it may be about time for a change in waste can design.

“If the opening is bigger, people would be able to use the cans more effectively,” he added.

Another idea that is being tossed around at environmental division meetings is placing advertising on waste cans that can generate revenue to employ more staff and install more cans.

“Overseas, they have started placing ads on garbage cans, and it’s been quite a success,” said Kim. “We can’t confirm anything yet, but there have been a few companies interested in the advertising aspect.”