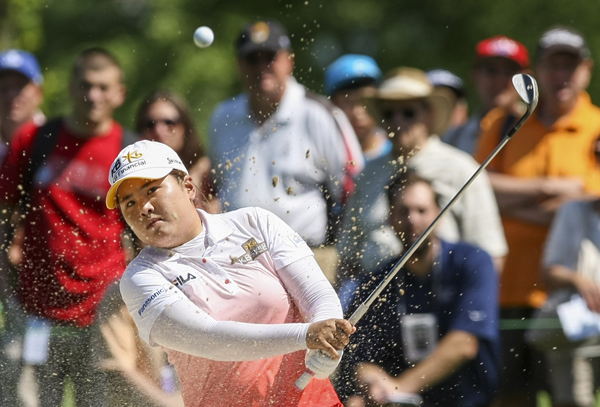 Park In-bee hits out of a bunker on the fourth hole during the final round of the LPGA Golf Championship in Pittsford, New York, Sunday. Park held off Catriona Matthew of Scotland in a playoff to win the tournament.[REUTERS/NEWSIS]

Park In-bee affirmed her position as the world’s No. 1 golfer with her second major title of the season.

It was her first major title since the Kraft Nabisco Championship in April and her third major overall. She won the U.S. Women’s Open in her second LPGA season in 2008.

Park became a top-ranked player with the Kraft Nabisco title and has won two more titles on the LPGA Tour since then. Park also won the Honda LPGA Thailand in February.

She won six of her seven titles in 22 of her most recent events, starting with the Evian Masters in July, which will be promoted into a fifth major this year. She also won the Sime Darby LPGA Malaysia in October.

“A year ago, everything, I think, really started to click,” Park said at the post-event interview.

“My swing was getting a lot better. I think the weakest part of my game was ball striking, and my short game and putting has always been very good. I wasn’t really able to hit the shots that I needed to. Starting last year, two years, I mean, I started to hit the ball a lot better, giving myself a lot of birdie chances.

Park became only the seventh player to win the LPGA Tour’s first two majors in a season and the first since Annika Sorenstam won the same two events in 2005.

“I mean, it was tough to win the second one, Evian, after four years with no win, but after that, I felt so comfortable and felt the confidence, and yeah, just really comfortable when I’m in the last group,” Park said.

There are 15 more LPGA events left this season and chances are good for Koreans to continue their record winning pace. In 2009, Koreans recorded 12 wins on the LPGA Tour, their most in a season. Only four of those were clinched through June.

At Locust Hill Country Club, fatigue gave way to relief for Park upon learning that playing 36 holes in one day wasn’t going to be enough to win the LPGA Championship.

Rather than fret about the eight fairways she missed and the three-shot lead she relinquished on the back nine Sunday, Park refocused before the first sudden-death playoff hole against Matthew.

“Nothing seemed to be working, so I really cleared my head, and just looked at the fairway,” Park said. “And I just smashed it.”

It was a dramatic finish to a long day in which organizers were forced to squeeze in the final two rounds after torrential rain postponed the first round on Thursday.

By 8 p.m. local time on Sunday - about 12 hours after Park teed off to open the third round - a winner was finally decided.

“It’s almost a miracle that I won today,” Park said. “I think I got lucky there, too. And I really tried to fight off and tried not to give up. That really paid off.”

The 42-year-old Matthew got to the playoff in an altogether different fashion. She finished with a bogey-free 68 before anxiously waiting to see whether that was enough to give her a shot.

“When I started the last round, I probably didn’t realize I could win,” said Matthew, who was seven shots back when the round began. “So to play well and get into the playoffs was obviously pretty good. Obviously, when you get into it, it’s pretty disappointing. But overall, a pretty good week.”

Norway’s Suzann Pettersen and American Morgan Pressel tied for third, a shot behind the leaders. Amy Yang, Chella Choi, Shin and Yoo Sun-young finished tied for fifth at 3-under 285, while defending champion Shanshan Feng, Michelle Wie and Choi Na-yeon were another stroke back at 2-under 286.

Sixteen-year-old Korea-born amateur Lydia Ko of New Zealand shot a final-round 69 to finish at 17th place at 1-over 289, equaling her best finish at a major.