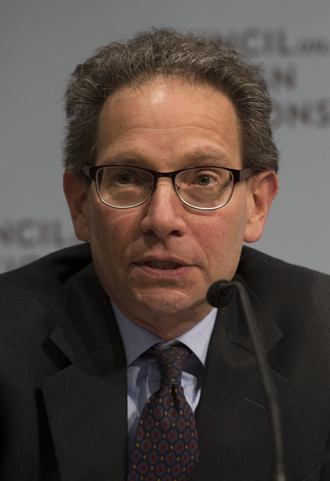 A shrinking American footprint is a reason “Korea, Japan and China need to begin to cooperate with each other to try to create some self-sustaining momentum in the region,” said a U.S. foreign policy and strategy expert.

Charles Kupchan, professor of international affairs at the Edmund A. Walsh School of Foreign Service at Georgetown University and a senior fellow at the Council on Foreign Relations, spoke on U.S. and China relations, the North Korea problem and South Korea’s role between the two superpowers as he sat for an interview with the JoongAng Ilbo last week, ahead of the two-day summit between U.S. President Barack Obama and Chinese President Xi Jinping.

Kupchan, who previously served as director for European affairs at the National Security Council during the first President Bill Clinton administration, gave a lecture at Seoul National University’s Graduate School of International Studies on June 3.

He is also the author of numerous books and articles on international and strategic affairs, including his 2012 book, “No One’s World: The West, the Rising Rest, and the Coming Global Turn.”

Q. The U.S.-China relationship is depicted as a relation of competition and cooperation, or that of love and hate. What is the most desirable shape of the relationship between Beijing and Washington?

A. I think that the best scenario would be one in which the U.S. and China begin to work together on concrete issues. History makes clear that when you have a top power and a rising challenger, there is inevitable competition. That’s inescapable. So the question is how can the U.S. and China avoid the situation where their competition increases and escalates. And I think part of the answer is the communication, the development of rapport between the leaders, but part of it is also that the two powers need to do concrete things to work together, in part because the leaders need to be able to send messages to their publics.

President Obama’s pivot to Asia is being considered as a strategy to contain the rise of China in the Asia-Pacific region. What do you think of an American pivot to Asia?

I think the pivot to Asia, or perhaps the better word is rebalancing, is inevitable. From my perspective I think the pivot has been portrayed with too much emphasis on the military issue and on the containment of China.

Not enough emphasis is put upon the engagement issue. It’s not clear to me whether this is a presentational issue or whether the Obama administration intended it to be primarily about containment of China.

But I’m hoping that in Obama’s second term the pivot becomes more diversified. I think that the message to China needs to be there are certain red lines and you will meet resistance. On the other hand, there has to be a message that we will look forward to working with China that is growing and becoming more responsible and help build a cooperative relationship with a rising China.

South Korea is in a very delicate position between the U.S. and China. The U.S. is our 60-year-old ally and China is our No. 1 trading partner. How do we charter our own course in this delicate situation?

In the 20th century, the U.S. has played a role of navigator by providing a steady leadership. However, you argue in your book, “No One’s World,” that U.S. leadership is waning economically and politically. Is that so?

I think it’s important not to overstate the pace and scope of change in the sense that the U.S. has been going through a difficult period. The wars in Afghanistan and Iraq did not go well. The Pentagon is now facing lean years for quite some time. And as consequence of that there will be a shrinkage in America’s footprint. And there is a desire among the American public to lighten the burdens of international leadership. That having been said, the U.S. is not going home. This is not the beginnings of new isolationism, it is the beginnings of more discriminating internationalism.

The resolution of the North Korea issue through dialogue is becoming more and more difficult. How do you solve this problem?

I think that North Korea remains one of the most intractable problems as an international agenda and that there are not good options in the sense that a military option is very unattractive and a diplomatic option has not yielded good success. And so I think that the words that come to my mind are patience and firmness, but keep the door open to negotiation. The great diplomatic breakthroughs of the last several decades were not expected. They were the result of courageous diplomacy. Sadat going to Jerusalem, Kissinger and Nixon going to Beijing, Gorbachev and Reagan working together and bringing the cold war to an end.

Do you think North Korea could be America’s friend?

I do think that once the breakthrough is made, then there’s a good chance you can build momentum and build confidence. The problem is that the breakthrough has not been made. And it is more difficult with North Korea than other countries because North Korea has proven that it cheats.

In 2009, President Obama said in his inaugural address, “we will extend a hand if you are willing to unclench your fist,” though he failed to reach out to Pyongyang in his first term. Do you think President Obama’s approach to North Korea might be changed in his second term?

With Iran and North Korea the ball is in the court of Pyongyang and Tehran. I don’t expect there to be change in the strategy of Washington until there is a sign from North Korea that they are prepared to negotiate in good faith.