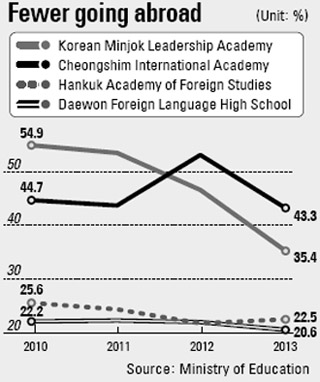 A decreasing number of high school graduates are pursuing their undergraduate studies overseas in recent years.

According to admission data by the Ministry of Education, which was analyzed by the private education group Etoos, the overseas college admission rate this year has declined by 0.1 percent to reach 0.2 percent of Korea’s total number of senior students in 1,718 high schools in the country.

When looking into university admission data from special purpose or foreign language high schools, known for sending a large number of their students to prestigious overseas universities, the same pattern was found.

At the Korean Minjok Leadership Academy, a special purpose high school located in Hoengseong, Gangwon, the number of graduates opting for overseas college has steadily decreased to reach 56 this year from 84 such students in 2010, when more than half, 54.9 percent, of its graduates chose to go overseas.

A study into admission data compiled by 19 such schools in the country conducted in June last year revealed that the number of students studying overseas after graduation dropped to 355 last year from 507 in 2008.

The number of students admitted to the country’s elite Seoul National University, meanwhile, rose to 496 from 286 over the same period.

Education experts attribute the ongoing economic slump coupled with the dormant real estate market to the decreased number of students studying overseas despite the country’s longtime obsession with English.

“[Unlike in the past] It has become much more burdensome for parents to pay for overseas study expenses including school tuition under the current economic conditions,” said Oh Jong-un, evaluation director at Etoos.

Some experts say an increasing number of parents worry that their children will deprive themselves of developing their personal network formed during college if their children study overseas. The network is deemed highly important in Korean society, where collective group values are strongly emphasized.

“Parents with high school students now think it’s better to go to a domestic university for better job opportunities,” said Im Seong-ho, director at another Seoul-based private education group Edusky. “The trend has shifted to college graduates who have finished bachelor studies in the country going overseas for master degrees.”

The study by Etoos also reveals that there are a total of 34 high schools in the country that have produced a 100 percent college admission rate this year.