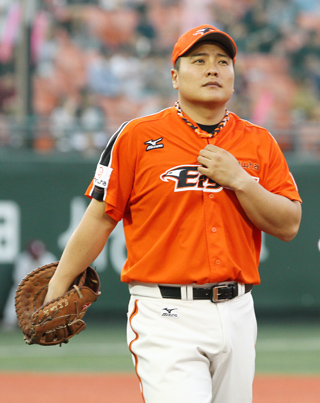 Kim Tae-kyun of the Hanwha Eagles has apologized after controversy erupted over his racially-tinged remark toward Shane Youman of the Lotte Giants.

“Regardless of the truth or false of the matter, I give my apology to Youman of Lotte,” Kim said in a statement released by the Eagles Monday night.

Earlier on Monday a Naver sports radio show, “Radio Ball,” quoted a remark by the Eagles slugger that some local baseball fans criticized as being racist.

“Youman’s face is so dark and his teeth are so white and that makes it really hard to hit the ball,” the show quoted Kim as saying, according to Osen, a local daily.

As his alleged remark spread quickly through social networking services, the Naver show tried to explain that Kim had no intention of hurling a racial slur at the 33-year-old African-American, but the controversy refused to die down.

Before the Eagles issued the apology statement, an Eagles official told the Korea JoongAng Daily that Kim was embarrassed about the controversy.

The official said they would talk with Kim to check whether he made the remark and why and to discuss how to respond to the controversy.

Kim said he meant to compliment Youman with the remark.

“What I tried to say when answering a question by a baseball reporter was that Youman’s pitching form is so excellent that the batters have a hard time to face him, but it seems to have been misunderstood,” Kim said in the statement.

Kim added that he maintains good relationships with foreign players in the Korea Baseball Organization like Denny Bautista, a 32-year-old Dominican pitcher for the Eagles.

“As a public figure, I will try to be more prudent and get closer to fans,” Kim said.

The Giants haven’t commented on the controversy. A Giants official told the Korea JoongAng Daily on Monday that the team wasn’t sure whether to tell Youman of the controversy, downplaying speculation that Kim intended to insult Youman.

Whether the controversy will pass remains to be seen, but observers say it could be a wake-up call to the potential hazard of racially-tinged remarks in a growing multicultural society.

Critics said that the same type of remarks as Kim’s would amount to a racial slur in Major League Baseball that could end a player’s career. They said that athletes in Korea should be as sensitive to racial remarks toward foreign players as Korean fans are to racial remarks directed at Korean players.

An Internet user rebuked Kim on Naver, likening his remark to a potential racial slur directed at Korean players in the major leagues such as Choo Shin-soo of the Cincinnati Reds.

“How would people react if somebody says that Choo Shin-soo is so yellow that it is hard to notice the moment that he swings the bat?” the Internet user said.