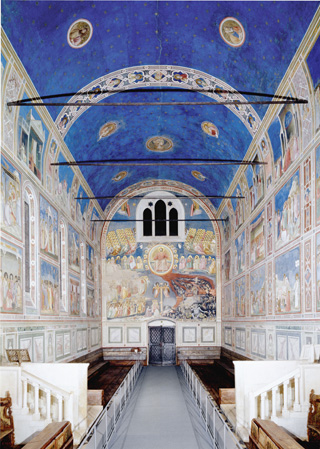 The frescoes depict scenes from the lives of the Virgin Mary and Jesus Christ as well as the Last Judgement. Provided by the chapel

PADUA, Italy - Adjacent to the gardens of Eremitani Museum in the Italian city of Padua, where Korean artist Kim Young-won’s sculptures are now on display, stands the Scrovegni Chapel, which is often dubbed a “treasure of Western art history.” The small church’s walls and ceiling are filled with frescoes by medieval artist Giotto di Bondone (1267-1337), who is considered among the most prominent of Italian Renaissance masters.

Accordingly, the Scrovegni Chapel is Padua’s most popular attraction along with the University of Padua, one of the world’s oldest universities. But it is not very easy to get inside.

Due to the fragile nature of the frescoes, completed around 1305, only 25 people are admitted at a time with each visit lasting only 15 minutes. Online reservation at the chapel’s Web site (www.cappelladegliscrovegni.it) is almost a necessity.

In addition, visitors are required to wait for 15 minutes in an air-conditioned room attached to the chapel before the visit so that the chapel interior’s climate is not disturbed. During that time, there is a video introducing the history and art of the chapel.

Despite these rigorous procedures, visitors will feel rewarded once they enter the chapel. Before their eyes will be a vaulted ceiling painted in deep azure like heaven itself and walls and arches covered with richly colored frescoes in golden brown and rose pink made to sit in harmony with the ceiling.

The Scrovegni Chapel in Padua, Italy, has a relatively simple exterior but is filled with masterpiece frescoes by Giotto. By Moon So-young

The frescoes, done by Giotto upon commission by wealthy banker Enrico degli Scrovegni, follow three main themes: episodes in the lives of Joachim and Anna, who are the parents of the Virgin Mary; episodes in the Virgin’s life; and episodes of Jesus Christ’s life and death in sequence.

The story through the three-tiered frescoes flows smoothly from left to right on one wall and then to the central arch and the opposite wall. To follow the narrative, viewers walk clockwise along the walls before arriving at the grandiose Last Judgement, which seems to have influenced Italian Renaissance master Michelangelo’s Sistine Chapel fresco of the same theme and Northern renaissance master Hieronymus Bosch’s grotesque and dark fantasy.

The figures in each episode are portrayed relatively simply but with vivid emotions.

For example, in a fresco depicting Jesus driving out merchants and moneylenders from the temple with a whip, a child’s face shows fear while the disciple tenderly holds him. The details are vivid, human and stunning.

Calling the frescoes a “revolution in the history of painting,” Stefano Zuffi, a renowned Italian art historian wrote in a book, “Giotto created an extraordinary visual story. .?.?. The human dimension melds with the sacred, reality prevails over the mystical detachment, feelings burst onto the scene, figures and architecture break with rigid linearity and acquire volume and impact.”