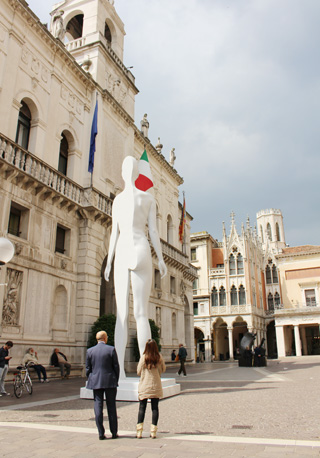 Passersby in the historic Italian city of Padua look up at an eight-meter bronze sculpture by Korean artist Kim Young-won installed in front of the city hall. By Moon So-young

PADUA, Italy - An eight-meter-high white bronze sculpture now stands in front of the city hall in Padua. Most passersby look up curiously, and many stop to take pictures or touch it.

Though the people of the historic Italian city with its abundant cultural heritage have been living amid numerous classical sculptures, the half-abstract human figure - in dramatic contrast to the neighboring antique buildings - must be a visual shock to them. In addition, the sculpture looks like it is folded in half from certain viewpoints but looks whole from other angles.

It is a work by Korean veteran sculptor Kim Young-won, 66, who started an exhibition with Italy’s renowned sculptor Novello Finotti, 74, on June 1. The exhibition is running until Aug. 20 at several venues in Padua, a city of art and science that flourished during the Middle Ages and early Renaissance.

“It is the first time that the city has given a foreign artist space in front of city hall,” Kim told the Korea JoongAng Daily in Padua late last month. “It is thanks to the city’s respect for Finotti. He proposed this exhibition, after he saw my work at a group exhibition of Korean sculptors in Pietrasanta [in northern Tuscany].” 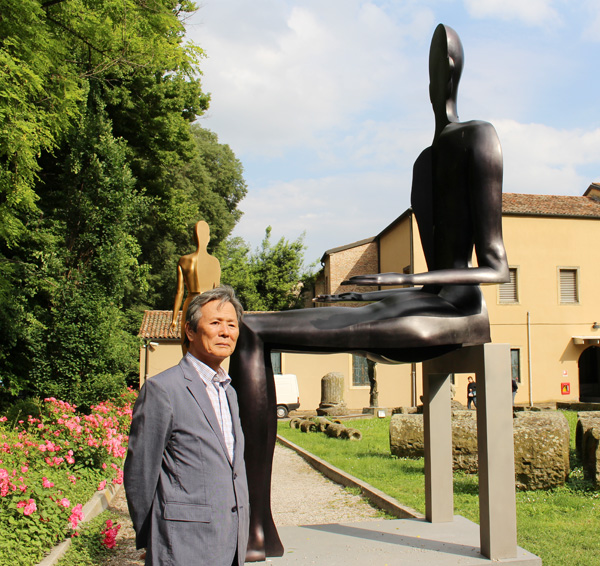 Korean veteran sculptor Kim Young-won poses with his work installed in the garden of Eremitani civic museum in Padua, Italy, on May 28. By Moon So-young

A piece by Finotti is also on display in the plaza, several meters from Kim’s sculpture.

Though the sculpture in front of the city hall, which is among Kim’s work from the 2000s, has a half-abstract form, he gained fame in Korea in the 1980s for his figurative sculptures of human figures with symbolic details.

As part of the exhibition, some of the sculptures from that time are on display at Palazzo Zuckermann, a 10-minute walk from the city hall, along with Finotti’s surrealistic works based on human bodies.

The exhibit shows the common points of Kim and Finotti; both works are figurative, mainly based on human bodies, but have symbolic and surrealistic elements. For example, Kim’s sculpture of a male figure, whose skin is divided into grids, “satirizes the contemporary situation that everything including the human body is standardized,” according to the artist. Another sculpture by Kim, a man that looks as if he is hanging from the ceiling with his abdominal region broken, symbolizes physical and mental torture that took place under the military regime of the 1980s.

But at the same time, Kim and Finotti’s works are very different in style and ambience.

“Finotti told me the points of difference impressed him when he saw my work in Pietrasanta. .?.?. He said he had never seen figurative sculptures with such characteristics in Italy,” Kim said.

“I think that the differences come from the fact that my works are based on Eastern philosophy and aesthetics, so they make active use of the space around and in the sculptures. On the other hand, Finotti’s works have strong storytelling elements and elaborate details.” 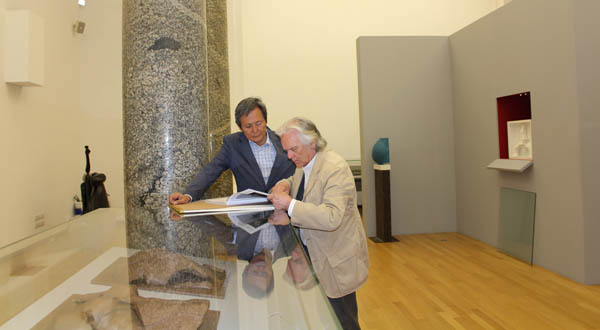 Korean sculptor Kim Young-won, left, talks with Italian sculptor Novello Finotti at the Palazzo Zuckermann in Italy’s historic city of Padua on May 28. By Moon So-young

As for the “use of the spaces,” Kim pointed to the sculpture in front of the city hall as an example.

“When it looks like it is folded in half from a certain angle, the disappeared half is in the air,” he said. “At that time, the space also becomes part of the sculpture. It also shows that existence and non-existence are one and also that the seen and unseen are one, which is related to Eastern philosophy.”

The exhibition is taking place at the beautiful gardens and cloisters of Eremitani civic museum, across the road from Palazzo Zuckermann. Nearby is the famous Scrovegni Chapel with frescos by the medieval master Giotto.

About 40 sculptures by the two artists are on display. The exhibition was organized by the Cultural Department of the Municipality of Padua and by the civic museum. 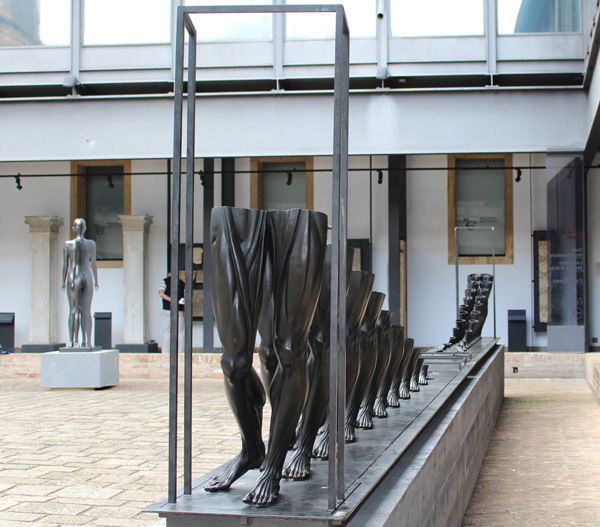 Kim is best known to the Korean public for the huge statue of King Sejong the Great (1397-1450) that sits in Gwanghwamun Plaza, central Seoul.

Asked why Kim made the statue not in his avant-garde style but in a very classical way, he answered, “Oh, it was made with the public’s tax money, so I had to make it so that it could appeal easily to the general public. “

“As for such statues, you cannot decide even a crease of the skirt or the length of the sleeves as you like it; numerous experts, including historians and costume scholars, participate in the design of the statue.”

Kim retired as professor and dean of fine arts at Hongik University last year. He has been working as chairman of the board of the Korean Sculptors’ Association since 2008.

As for Finotti, he participated in the Venice Biennale in 1966 and 1984. In addition, he held a large-scale retrospective at the Palazzo Te in Mantua, Italy, in 1986.

He has been commissioned for important work, including the intervention in the facade of the Basilica of Santa Giustina of Padua, and the decoration of an altar and the making of a statue in St. Peter’s Basilica in Rome.