Dead music format comes back for another spin

Dead music format comes back for another spin 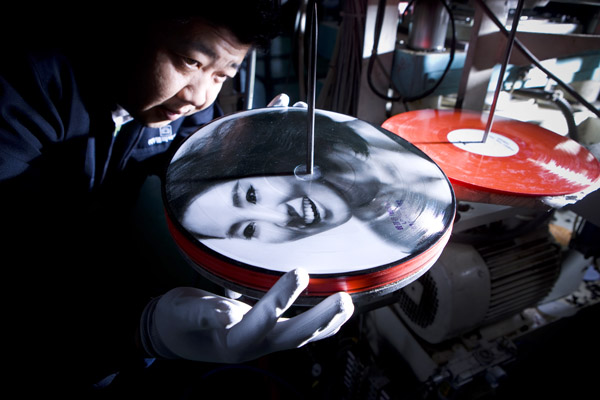 LP Factory is the nation’s only manufacturer of LP records. Lee Gil-yong, head of the LP Factory, makes a final check on color LPs that will be exported to Japan. The one pictured above features the face of singer Patti Kim. By Kwon Hyuk-jae

With the advent of MP3 players and smartphones, however, music has become something you can play anytime and anywhere, just by touching a button on the screen, even when there is no electricity. Technology made it possible to zip hundreds of music files into a single smartphone or MP3 player, but some say the depth and richness of sound has been sacrificed in return for digitalization.

Naturally, cassette players and turntables have become things of the past. But trends always come and go and turntables are coming back strong these days.

Some music aficionados have started to spin turntables again because they crave more natural sounds, while some others simply feel nostalgic for analog sound. That is because the digitalization process removes unnecessary noise and inaudible notes while LPs, or long-playing records, record all ranges of notes.

Most music lovers listen to music with their digital gadgets but turntables are still around, often favored by middle-aged men who grew up listening to records. The hobby of spinning turntables, however, has trickled down from enthusiasts to people in their 20s and 30s who aren’t familiar with the age-old sound.

Most recently, Traffic, a bar in which you can listen to LP records, opened its second branch in Apgujeong-dong, southern Seoul, after its first branch in Garosugil, Sinsa-dong.

Garosugil is the trendiest area in southern Seoul, where restaurants, cafes and multi-label shops are clustered.

Between Night and Music, a club that plays music from records, has also grown over the past decade and its locations can be found across the nation.

There is another LP bar named Gopchang Jeongol, which is the name of a Korean dish that is a spicy stew made with beef tripe.

Opened 10 years ago, the bar in Seogyo-dong, western Seoul, was a hangout place for people in their 40s and 50s, but it attracts much younger customers these days thanks to the popularity of Between Night and Music. The LP bar once attached a sign that reads, “You can’t dance here” because of a surging number of young customers who are accustomed to dancing to LP music.

The radio show, “Jang Kiha’s Great Radio,” hosted by Jang Kiha, the lead vocalist of the indie band Jang Kiha and the Faces, also designates every Wednesday as a day for LP music. The segment has been taking place for a year.

Yohei Hasegawa, a member of the indie band, chooses what to play every Wednesday from among the 7,000 records he owns. For this segment, SBS purchased a turntable.

As the segment has been aired repeatedly, more young listeners find themselves becoming hooked on the typical sound of LPs, which often include pops and cracks. The segment has surely played a crucial role in promoting LP sounds among young music fans.

Responding to the young demographic whose taste is moving from digital music to LPs, culture critic Kim Gab-su said, “What intrigues these people is nostalgia for what we had in the past.

“With MP3 files and CDs, you can copy the music anytime. But an LP is different in a way that you can possess it and keep it clean by polishing it regularly. By taking care of LP records with care, young people find them more valuable than other music mediums.”

The Record Fair that was held at Nonhyun-dong, southern Seoul last month is another example of young music lovers’ changing tastes. The annual fair, in its third year, is a chance for people to search for and buy LPs.

In addition, a limited number of compilation LPs of famed musicians are produced and sold every year. In order to get these rare records, hundreds of people queue even before the opening of the event.

“Most of our targets are people in their 20s and 30s,” said Kim Young-hyuk, an organizer of the fair and pop music critic. “A majority of them purchased their first LP records through the first and second fairs. An LP is no longer a relic of the past but music of today.”

Still, there is an ongoing debate over which is better between LPs and CDs in terms of sound quality. “When CD came out first, the music industry promoted CDs as a perfect format that surpasses LP’s sound quality, but it is hard to see a CD as a perfect product,” said pop music critic Kim.

“It is impossible to perfectly record the music that is played within a studio with a CD. Despite the many flaws an LP has, an LP is a complete form of music medium because of its vivid and rich sounds,” Kim continued.

The revival of LPs in the music scene has also changed the way local and international music labels market and manufacture albums.

Thanks to the LP boom, local LP manufacturer Khiov could stay afloat. The company produces music after the 1990s that had never been released on LP. So far, diverse genres of music from Pat Metheny to Charlie Haden to Michael Brecker have come out on LP.

“I told myself as I began this business, ‘I will keep doing this work as long as the business doesn’t go bankrupt,’?” said Seo Bo-ik, the head of Khiov. “But I was surprised to see higher-than-expected sales of Pat Metheny because his LP was sold out within a month of release.”

LP Factory, which also opened last year, seven years after the last LP manufacturer shut down in 2005, is the nation’s only factory that produces LPs.

With increasing record sales, turntable sales have also surged. According to I’Park Department Store, in Yongsan District, central Seoul, only two or three turntables were sold per month last year, but between 20 and 30 turntables are now sold per month.

Turntables have also been upgraded a lot. There is a turntable which transfers LP music to a USB stick, while another converts LP music into MP3 files. The typical crack and pop sound on an LP is recorded when it is converted into MP3 files.

The LP craze is also found on online music Web sites. The music streaming site Ponki (www.ponki.kr) opened in March and attracted 500 members in a month. The streaming Web site provides phonograph music made during the Japanese colonization and LP music of the 1970s.

“For middle-aged men and women who are accustomed to acoustic sound, [getting back to LPs] is a journey to go back to original sound, while it is an exploration of a new sound for younger people,” said Kim Gwang-wu, who operates Ponki.

It’s not only Koreans but also North Americans who are going retro in terms of music. According to Nielsen SoundScan, a U.S.-based Web site which tracks sales of music and music video products in the United States and Canada, 4.6 million copies of newly-released LPs were sold last year, which is a 19 percent increase from a year ago. Given that only 300,000 records were sold in 1993 in North America, the sales increase is noteworthy.

Except for the Beatles’ “Abbey Road,” the top 10 best selling LPs were all new albums, such as Jack White’s “Blunderbuss” and Mumford & Sons’ “Babel.” It is a significant sign that major consumers of records are not only middle-aged music fans but younger ones who are between their teens and 30s.