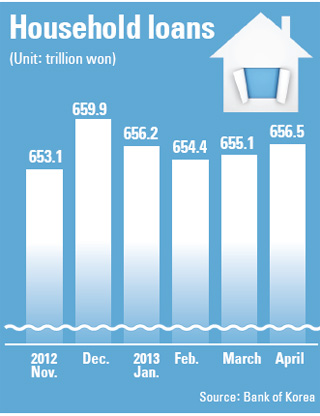 Household loans from financial institutions including commercial banks have risen for the second consecutive month.

Housing related loans including mortgages shrunk in April, whereas nonhousing loans saw sharper growth. Housing-related loans fell 0.1 percent year-on-year to 401.1 trillion won and non-housing loans grew 1.5 percent to 255.4 trillion won. The central bank said the housing loan total fell because conforming loans by the Korea Housing Finance Corp. went up. The state-run housing finance company allows the so-called “house poor,” those who have trouble paying off interest or principal as their home’s value drops, to repay over as long as 30 years at low interest.

The conforming loan was designed to ease the housing burden while spurring the real estate market.

One concerning indicator in April’s household loan growth is the increase in non-housing loans, which include loans that use people’s deposit and savings accounts for collateral. In most cases, such loans are used for daily necessities.

In an effort to spur the stagnant economy, whose quarterly growth has remained below 1 percent the past two years, the government has rolled out a stimulus package that includes a 17 trillion won supplementary budget approved by the National Assembly in May. The central bank also chipped in by lowering the key borrowing rate that same month from 2.75 percent to 2.5 percent, the first change since October.