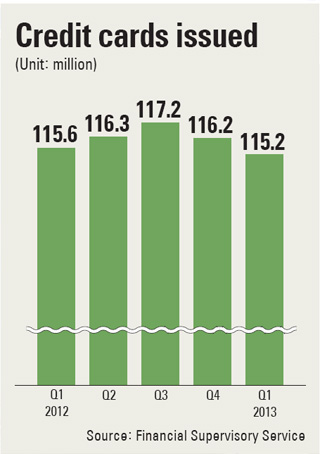 A high-level government official working in Sejong City was frustrated recently when he was rejected for failing to meet criteria for a new credit card.

Though the public official had a steady job and high credit rating, he had received a mortgage loan when he purchased an apartment in Sejong City when the government ministry he works for moved to the new administrative complex.

Based on the large loan, the credit card company concluded his disposable income was less than 500,000 won ($440.50) a month. Disposable income is calculated by subtracting the amount of principal and interest from his net income.

Ever since the country’s financial regulator announced new measures last October advising credit card companies to be stricter when issuing plastic cards, companies have intensified the screening process. Though the government official complained to his friend who oversees credit card affairs at the Financial Services Commission, it was no use.

In the past, credit card companies competed to lure customers, but with a stricter screening process more applicants are being rejected.

Credit card companies have intensified requirements and now issue cards only to those with a credit rating higher than six and more than 500,000 won in monthly disposable income. Industry experts note there are many people who don’t qualify.

“Even those with a level one credit rating and those with high social status like doctors, lawyers, government officials and executives from large companies are often rejected,” said Kim Hae-chul, an official from the Credit Finance Association.

According to the Financial Supervisory Service, the total number of credit cards being used in the fourth quarter last year dropped by 890,000 from the previous quarter.

From January to March, the number dropped by 1 million. Industry insiders blame the stricter screening process.

The government’s move last year was made in part to tackle growing household debt, which is nearing the 1,000 trillion won mark.

The problem, however, is that the information credit card companies receive often is inaccurate.

Credit information companies determine the amount of annual income of an individual by a formula based on occupation, workplace and age. That amount frequently is different from an individual’s actual income.

As for determining an applicant’s debt, credit information companies use a standardized interest rate and repayment period.

If the loan is received from a bank, for example, a credit information company would calculate the amount of principal and interest repayment by applying 46 months at an interest rate of 7.9 percent.

The amount of principal and interest that needs to be repaid would be calculated much higher for those who borrowed money from banks at a lower interest rate.

“Though individuals can prove to credit card companies that their disposable income is actually higher than 500,000 won by submitting separate documents, the process itself is very complicated,” said an official from a credit card company. “The number of complaints by individuals asking why they are not able to receive a new credit card even though they have a high credit rating has increased this year.”

In the meantime, though there are mounting complaints from individuals, there is also a growing voice noting that the government should introduce stricter rules and measures to manage household debt and the financial soundness of credit card companies.

“The regulations when issuing new credit cards in major developed countries is much stricter than in Korea,” said Lee Jang-kyun, a researcher from Woori Finance Research Institute.