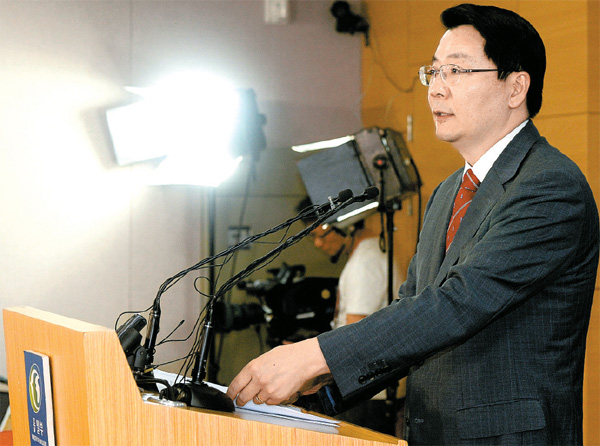 In the central government complex in Seoul yesterday evening, Ministry of Unification spokesman Kim Hyung-suk explains why the inter-Korean talks scheduled to start today were called off. [NEWSIS]

North Korea walked away from two days of talks with South Korea scheduled to start today saying it was insulted by Seoul’s choice of its chief negotiator.

“Today, North Korea unilaterally informed us it was postponing the inter-Korean governmental talks arranged in Seoul, criticizing the rank of our chief negotiator,” Kim Hyung-suk, spokesman of the Ministry of Unification of the South said at a press conference yesterday evening.

“We highly regret this position of North Korea. It doesn’t accord with common sense or international norms.”

Expectations were high for the first high-level talks between Seoul and Pyongyang in six years since the last ministerial meeting in May 2007. But the agenda for the talks was unresolved, and the ranks of the chief negotiators were a source of friction from the start.

Seoul wanted the talks to be ministerial-level with its delegation led by Unification Minister Ryoo Kihl-jae. It wanted Kim Yang-gon, director of the United Front Department of the North’s ruling Workers’ Party, to lead the delegation traveling by land from North Korea.

Kim, who has been in charge of South Korean affairs since 2007, is considered an influential figure with sizeable authority in the North.

But Pyongyang didn’t want a ministerial-level meeting - although it still expected Ryoo to lead the South’s delegation. Pyongyang considers Kim more important than a minister, while Seoul considers him minister-rank.

According to spokesman Kim, liaison officials from Seoul and Pyongyang simultaneously exchanged lists of delegates at around 1 p.m. yesterday at a face-to-face meeting at the Neutral Nations Supervisory Commission in the truce village of Panmunjom.

As its chief representative, Seoul named Kim Nam-sik, vice Unification Minister. The North named Kang Ji-yong, director of the Secretariat of the Committee for Peaceful Reunification of Korea, a state-controlled independent organization in charge of inter-Korean interactions.

“North Korea said if the Unification Minister doesn’t come, they wouldn’t attend the meeting,” Kim said. “They said the choice [of a vice-minister] is a grave provocation and a ridiculing of them.”

Asked whether the talks were postponed or canceled, Kim said, “Yes, the meeting arranged for tomorrow was canceled. But we want to say to Pyongyang that the door to a dialogue is still open.”

Kim said Seoul didn’t raise any objection to the North’s delegation. “We judged that Kang is not the counterpart to a Unification Minister,” Kim said, “Given the duties and the responsibilities of the posts.”

Kim Yang-gon is known to be close to North Korean leader Kim Jong-un as a ruling party secretary in charge of Southern affairs.

In 2007, Kim had a secret meeting with then-National Intelligence Service chief Kim Man-bok to arrange the second inter-Korean summit, which was held in October 2007.

In 2009, he met with Yim Tae-hee, then-special envoy to President Lee Myung-bak, in Singapore, to negotiate a third inter-Korean summit that never came off.

Kim officially ordered the withdrawal of all 53,000 North Korean workers from the Kaesong Industrial Complex in April, shutting down the eight-year-old factory park.

But Kim didn’t attend any of the 21 ministerial-level meetings between 2000 and 2007. Instead, North Korea sent a so-called “chief cabinet councilor” as chief delegate, while the South usually sent its Unification Minister.