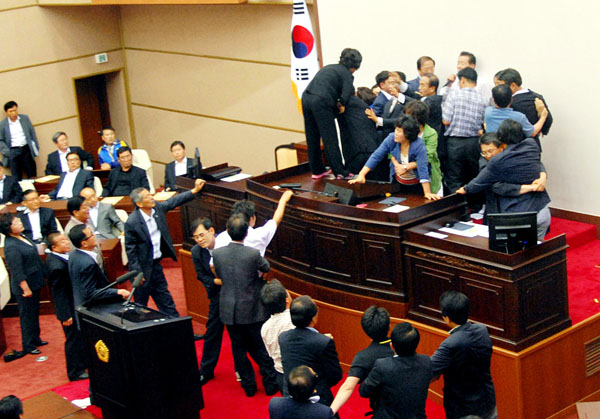 Opposition party members of the South Gyeongsang Provincial Council scuffle as the ruling Saenuri Party members try to railroad a bill to close down the Jinju Medical Center yesterday. [NEWSIS]

South Gyeongsang Provincial Council members of the ruling Saenuri Party railroaded a bill to close down the Jinju Medical Center yesterday despite fierce physical confrontation by opposition group members at the provincial assembly, bringing the controversial and money-losing public center a step closer to complete closure.

The South Gyeongsang council held a plenary session at around 2:15 p.m. yesterday and introduced the bill for passage while 11 members of the opposition council tried to stop Speaker Kim Oh-young from proceeding with the voting session.

During the session, physical confrontation between the two groups unfolded with the outnumbering Saenuri Party members guarding Speaker Kim to help him carry out the passage of the bill.

Without proper passage procedures such as an inquiry and discussion session, Speaker Kim declared the passage of the bill after asking struggling council members if they agreed to the passage, which was given verbal consent by the majority Saenuri members.

“As the majority consented [to the passage], the bill is passed,” announced Kim.

The physical scuffle among the council members continued throughout the 10-minute-long passage procedure. Outnumbered by the majority Saenuri members, the 11 council members, who had pledged to block the passage of the bill, failed to stop it.

Of the 57 South Gyeongsang Council members, 39 belong to the Saenuri Party, while 11 are opposition members. Seven are independents.

“To pour provincial taxpayers’ money into fixing the incurable Jinju Medical Center would be the equivalent of neglecting the provincial government’s public duty to the people,” said South Gyeongsang Gov. Hong Joon-pyo in a statement released yesterday after the bill went through.

The opposition group members held a press briefing in front of the council building, claiming the vote was completely invalid as the bill passage did not meet proper voting procedures.

Local civic groups vowed to conduct a referendum on the center closure. To hold a referendum, the groups must receive signatures from five percent of eligible voters in South Gyeongsang, or 130,000.

If the signatures are raised, the vote is expected to cost the local taxpayers over 10 billion won ($8.81 million).

The passage of the bill came 105 days after Gov. Hong first indicated he would push for the closure of the 103-year-old public center on Feb. 26, citing its accumulating loss of 28 billion won. The 58-year-old governor who had served in the past as chairman of the Grand National Party, predecessor of the Saenuri, also criticized the center’s labor union for its hardline stance and blamed it for causing the Jinju center to lose money.