Korea on brink of Cup after win over Uzbekistan

Korea on brink of Cup after win over Uzbekistan 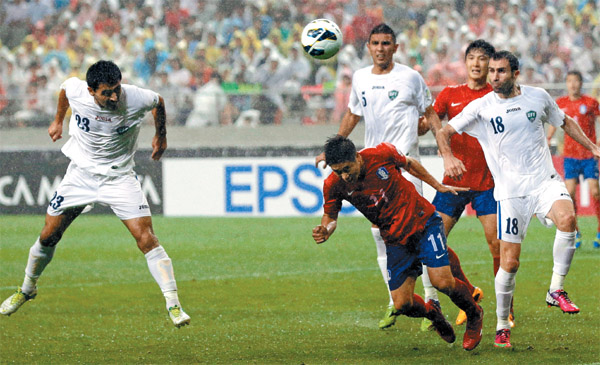 Uzbekistan’s Akmal Shorakhmedov, left, scores an own goal against Korea during their Group A qualifying match for the 2014 World Cup at Seoul World Cup Stadium in Seoul, Tuesday. Korea won, 1-0.[AP/NEWSIS]


An eighth successive World Cup berth is in sight, but Choi Kang-hee’s squad is resolute to win it in style.

After a 1-0 victory over Uzbekistan in Seoul Tuesday night, the Korean national football coach said that his team will be going all out to beat Iran.

With the win on a 43rd-mintue own goal by Akmal Shorakhmedov at the Seoul World Cup Stadium, Korea improved to 14 points and has almost secured a top-two finish in closely contested Group A. Iran, which routed Lebanon, 4-0, early yesterday morning in Korean time, is a point behind. 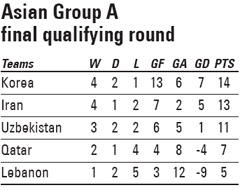 Uzbekistan, which entered the Korean game on the same 11 points, will have to overcome a huge goal difference with Korea even if it wins its final qualifier against Qatar. It also has to wait for Korea to lose to Iran to have a shot for its first-ever World Cup appearance.

Still, Choi said that he seeks to get back at Iran.

“Regardless of whether we qualify for the World Cup or not, we will do our best in an Iran match,” Choi said after Tuesday’s match.

Korea will wrap up the qualifying round for the 2014 Brazil World Cup with a match against Iran at the Munsu World Cup Stadium in Ulsan on Tuesday.

“Iran is an opponent that we have always crossed paths with on a crucial stage,” Choi said. “Besides, we took a loss in the previous away match.”

Korea knelt down to a 10-man Iran team, 1-0, in Tehran in October, after going through what it believed was Iran’s intentional disturbance of its preparation, including limited practice time at a low-quality stadium.

Choi said that he prefers to see Uzbekistan qualify for a seat at Brazil, rather than Iran, which will only be possible if Korea beats Iran.

Uzbekistan’s victory over Qatar, plus a draw in the Korea-Iran match would leave Iran and Uzbekistan level on 14 points. But, Iran is ahead of Uzbekistan in goal differential by four, meaning Uzbekistan will have to beat Qatar by at least four goals.

“We will cause pain to Iran and get prepared [for the Iran match] with that mind-set,” Choi said.

Two teams from the five-country Group A will get an automatic slot to the 2014 FIFA World Cup, while the third-place finisher must enter two-leg playoffs with a South American team.

It is the first time in 20 years Korea has yet to seal its fate before the final qualifier match.

On Oct. 28, 1993, the Taegeuk Warriors routed North Korea, 3-0, in its final qualifier, but had to wait to see the result of another match that day between Japan and Iraq. Japan, who was two points ahead of South Korea, was held to a 2-2 draw with Iraq, and South Korea advanced on goal difference over Japan, as a runner-up to Saudi Arabia.

Choi’s squad will enter the Iran match with a shallow midfield. Park Jong-woo must serve a one-game ban due to a yellow card the 24-year-old Busan I’Park midfielder received against Uzbekistan.

Choi also ruled out bringing back Ki Sung-yueng of Swansea City and Koo Ja-cheol of Augsburg, who had been left off of the 25-member roster for the final three qualifiers.

It remains to be seen whether Choi will keep testing a changed attack formation that he displayed against Uzbekistan.

Lee replaced Lee Keun-ho in the second half and took over the backup striker position from Son, who was then sent to assume Lee Keun-ho’s position on the left wing.

“We need to be prepared for the Iran match in a whole different way,” Choi said. “I will select the players during a training session in Ulsan.”

The players were given the day off after the Uzbek match and will regroup today.