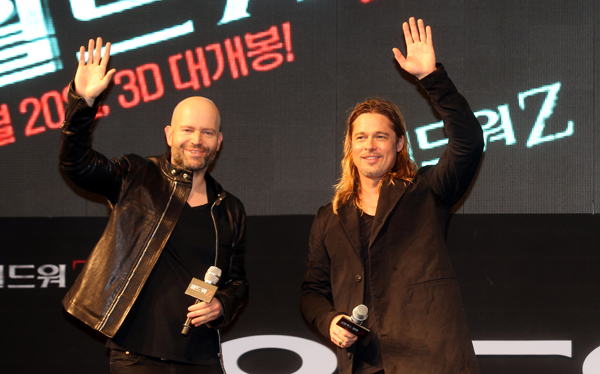 On Tuesday night, the Hollywood ace took a 30-minute red-carpet walk along Cheonggye Stream to meet with his Korean fans ahead of the opening of his latest film “World War Z” next Thursday.

Hours before Pitt arrived with his umbrella-carrying escorts, a flurry of media and fans descended on the stream in downtown Seoul decked out in raincoats. They were eager to catch a glimpse of the actor-producer, who touched down in Seoul with his son Pax Jolie-Pitt just hours earlier.

During his second visit to the country, Pitt didn’t let a little rain get in the way as he walked the red carpet with “World War Z” director Marc Forster.

Pitt also took the stage for a quick hello in which he thanked fans for their “warm greeting” and reminded them that he had fulfilled a promise. (When he was here last time to promote “Moneyball,” Pitt promised he’d be back.)

He also recorded an episode of “Night of TV Entertainment” hosted by Girls’ Generation’s Tiffany at Gyeongbok Palace.

Pitt’s latest project was much talked about as rumors circulated that Pitt and Leonardo DiCaprio had vied for the rights to produce the bestseller by Max Brooks. It garnered more attention after the budget jumped from $170 million to $400 million.

The apocalyptic-zombie story, which sees Pitt play heroic father and former United Nations employee Gerry Lane, is tipped be one of the blockbusters for the summer.

Many Hollywood superstars have visited Seoul this year, as Korea becomes an important film market in Asia.

Prior to Pitt, some other A-listers to have visited include DiCaprio, Robert Downey Jr., Vin Diesel, Dwayne Johnson, Michelle Rodriguez and Will Smith.