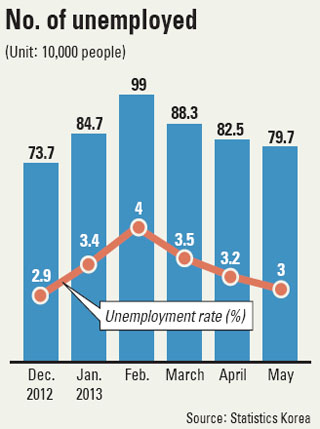 Last month, 265,000 more people found jobs compared to a year ago, raising the total number of employed in Korea to 25.4 million people from 25.1 million in April.

The unemployment rate also was 0.1 percentage point less than the previous year at 3 percent. While a decline in the unemployment rate is welcome, coupled with a falling employment rate it could indicate job opportunities have become tighter and the number of active job seekers has shrunk. In April, 345,000 more people found jobs compared to April last year.

Furthermore, the economically inactive population, such as those who have given up looking for work or students, grew by 273,000 from a year ago to 15.9 million.

By industry, manufacturing jobs grew 2.6 percent, increasing for the 11th straight month, while financial industry jobs were up 3.4 percent.

According to the Bank of Korea last Friday, Korea’s economy grew 0.8 percent in the first quarter compared to the fourth quarter last year, and 1.5 percent year-on-year.

Quarterly growth has remained below 1 percent since the second quarter of 2011.

The Park administration last week unveiled a plan to raise the employment rate to 70 percent within five years. It has been about 60 percent since 2003.

To do so, the government plans to increase participation of women in the economy, while raising the quality number and competitiveness of small and midsize companies as well as the service industry, which is a shift from a male-dominated, long-hour manufacturing and conglomerate centered economic structure.