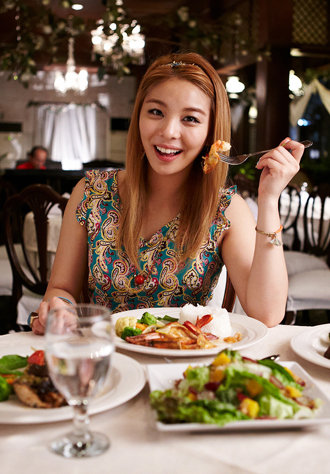 Singer Ailee released eight videos yesterday of her three-day trip to Philippines, which was coordinated by the Philippines Department of Tourism in Korea.

Different from other travel books or videos, she even points out some places where single travelers can get the most beautiful backgrounds when taking self-portrait photos in Manila, capital of the country.

“To help people experience the Philippines more actively, we’ve decided to introduce such movies,” said Maricon Basco-Ebron of the Philippines Department of Tourism in Korea. “This will be a good chance to promote travel destinations in the Philippines.”

Ailee made a video of eight must-see places in Manila and categorized them into themes of shopping, rest or entertainment. She introduces major shopping district Fort Bonifacio High Street and the golf resort Club Intramuros, which has garnered popularity after having so many golfers record holes-in-one.

“Ailee has been chosen to represent the unique image of the Philippines as she is loved for her exotic looks and charming voice,” Basco-Ebron said. “We think she adds more color to the country’s existing beauty.”

The videos were released through YouTube, and people can also have them sent to their smartphones.

Ailee has not yet discussed another trip to the island nation, where she could produce more videos, according to Route Three, the PR agency of the tourism agency.