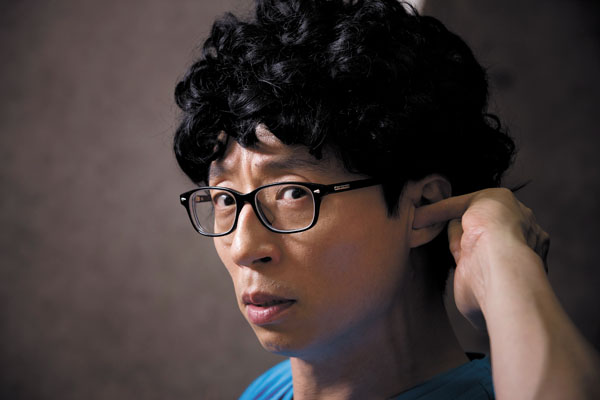 
When flipping through the channels on the weekend, it seems like every program features Yoo Jae-suk. On Saturday evenings, he participates in outdoor adventures on MBC’s “Infinite Challenge,” and on Sundays he runs to complete missions on SBS’s “Running Man.”

Many call the popular star the “MC of the nation” given his track record of turning shows into hits once he takes the reins. He came to fame as an entertainer on “Infinite Challenge” and as a talk show host on “Come to Play,” which ran for eight years.

Unsurprisingly, Yoo is unique among comedians. Unlike Park Myung-soo, who puts on an angry attitude, or Kim Young-cheol, who is known for mimicking veteran actors, Yoo has no particularly famous trait.

“When the CEO of one of my former agencies criticized my lack of charisma, I told him that it’s never made me uncomfortable,” said Yoo. “As it is hard to change one’s personality, I told him that unless it’s something he can buy for me, I will just live my life.”

Clearly his character is not holding him back. He has won numerous awards, including the Grand Prize for Television at the Baeksang Arts Awards last month.

Although he is always asking questions of others, he rarely takes the time to talk about his own life. So he sat down with the JoongAng Ilbo earlier this month to share his bumpy road to stardom.

Top: Yoo wears a grasshopper hat as he is nicknamed after the insect. Middle:Yoo Jae-suk delivers entertainment news as a reporter on Entertainment Weekly in the late 1990s. Bottom: Yoo waves at his wedding to MBC announcer Na Kyung-eun in 2008. [JoongAng Ilbo]

Q. What were you like when you were young?

A. I was a very funny kid. I performed lots of pranks, and I was in charge of entertainment whenever there were school events such as field trips or festivals. I studied hard when I was in an elementary school - I thought that was worth noting.


Since when did you dream of becoming a comedian?

I have loved making my friends laugh since elementary school, so it was natural for me to decide on this career. As soon as I started at Seoul Institute of the Arts in 1991, I entered the KBS College Comedy Festival. My professor said I should try it after I graduated, but I was dying to become a comedian. I receive the lowest award.


How did it feel to get that award?


What did you do?

I picked my ear while I went up to receive the award as a sign of protest. I really didn’t know what the real world was like. After I made it into broadcasting, other comedians did come to find me, but not for the reasons I expected. They were looking for the arrogant me who picked my ear in front of the cameras. Now that I think about it, I was extremely mistaken and I should have been thankful to become a comedian at all. My life as an unknown comedian started that way.


You were unknown to the public for seven or eight years. What was the problem?

It was very simple. I didn’t put in enough effort and I always blamed others. I never blamed myself for not doing well and believed others didn’t recognize my value. I was once asked to play a person who was just hit by a bomb. I had to have a messy hair, put black makeup on my face and wear the most tattered clothing. I should have put my best effort into playing that role, [but I didn’t]. Instead, I was only thinking about how I could look cleaner. I wondered why the producer hated me and used me for such roles. I never tried to come up with ideas [for the comedy shows]. I just blamed other people every night before I went to bed. 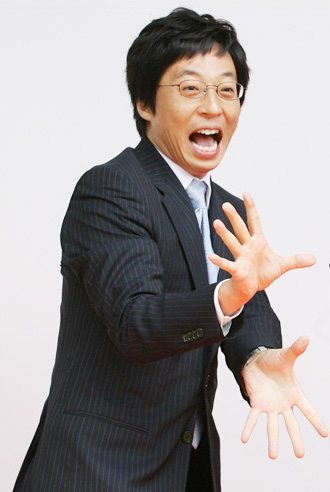 Do you regret your actions?

What I regret the most about my life in my 20s is that I spent time meaninglessly. What a waste of time. I’m so regretful of the times when I didn’t have an aim and only talked badly about others. I wouldn’t have this regret if I had put my passion into something.

When did you start having anxiety attacks onstage?

There was a time when I just wandered aimlessly and wasn’t cast for any shows. My friends, including Park Su-hong and Kim Yong-man, invited me to take part in a special program for Chuseok - a parody of New Kids on the Block.

I just started shaking when I was onstage in front of all these people I didn’t know. I forgot my lines and didn’t get the dance moves right at all. I felt burdened by my desire to really prove myself through that act.

You worked for a while as a reporter on “Entertainment Weekly” after you were discharged from the Army. How was that?

I read the script more than 100 times and marked the parts where I would mess up. But after I was called on [to present stories] I would make mistakes even before getting to the difficult parts. My eyes just wouldn’t focus. All the letters would just dance around and become jumbled. So, I was fired.

Did it get better when you were cast on the “Seo Se-won Show,” one of the most popular television programs at the time?

I was shaking then, too. My mouth was quivering and my hands were trembling. Surprisingly, audiences liked to see me talking about trivial stories while trembling. I wasn’t sure whether people would laugh at my stories, but I was shocked with the response I got. People started to call me by name and not my nickname, grasshopper. The show was the greatest turning point in my life.

After you started to put your name out there, did you realize what kept you out of the spotlight for so long?

I thought that I would always be at the center of the spotlight, outshining other performers. But I was ignored, and so I crashed down to the bottom too early in my career. I kept asking myself what went wrong. The problem was that I was only thinking about myself. Just like baseball players need to guard their positions and work together as a team, comedy is also teamwork. But, I was only thinking about standing out myself instead of considering the success of the team. I should have showed reactions to my counterparts’ good jokes, but I was narrow-minded and didn’t want to simply help them [gain popularity]. In my head, I had to be the only lead character.

You have been on “Infinite Challenge” for seven years. What’s your take on the program?

I never thought that I would be doing this program for so long. It contains traces of our lives. Park Myung-soo got married and now has a daughter, Minseo. After this, my child was born. More and more cast members got married. I should not make any wild guesses about my life, but I think my career in entertainment will remain in sync with the program.

What about “Running Man”?

After the first episode aired, many people were very skeptical of whether we could succeed as a weekend show. I got scared. I was scared of disappointing the people around me and the people who followed me [to the program] because they trusted me. If the program were to be canceled, its members would have been scattered around again.

Do you think you are at your peak?

I hope my high point has not come yet. I do want to stay in the good times until the day I stop [working], but I don’t think that’s possible. Someday [people] will say that Yoo Jae-suk is old school. I’m ready for that moment, and I don’t think I will be startled when the time actually comes. As long as I pledge to do my best for as long as I can, there is nothing to be afraid of. Of course, I will reminisce from time to time. I wonder if my son will believe me if I tell him that I used to be big.

Have you ever suffered from depression or felt the urge to take your own life?

I have spent enough time worrying, but I don’t think I have suffered from depression. And frankly, speaking of suicide, I get scared of death.

You have many different nicknames. Which one do you like the most?

Grasshopper. I hated it so much at first. In the late 1990s, a TV producer gave me a grasshopper mask and said that I should wear it to get on TV shows since I wasn’t known well. At the time, I hated being called grasshopper and just wanted to be Yoo Jae-suk. The mask also messed up my hair. But it made me who I am now.

Do you work to project a certain kind of image on your shows?

I don’t plan what I do. I just focus on what comes at the moment. If I have to speak harshly, I’m willing to do that. I don’t plan on sticking to the image I have right now. I do say this to guests on the program so that they aren’t so anxious. It is not easy to make others laugh on entertainment programs. I know this because I have gone through such struggles. Of course, it is good to have some humorous moments, but we don’t need jokes every day.

How do you want your fans to remember you?

I hope I get a review like, “Oh, he really did his best.” I could not ask for more if there are words like “fun” or “interesting” in my reviews.