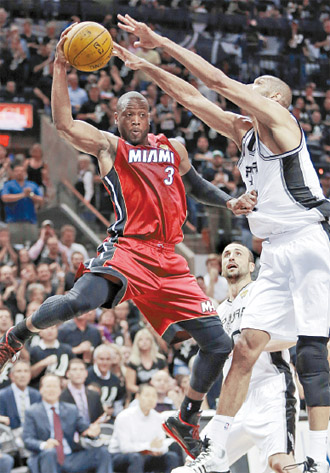 Either undrafted or unwanted, they were once more likely to be found playing in the summer league or some other country than against the mighty Miami Heat.

On Tuesday, they led the San Antonio Spurs to one of the best-shooting, biggest blowouts in NBA Finals history.

Green made seven of the Spurs’ finals-record 16 3-pointers, Tim Duncan had 12 points and 14 rebounds, and the Spurs clobbered the Heat, 113-77, on Tuesday night to take a 2-1 lead in the series.

Green scored 27 points and Gary Neal made six 3-pointers while scoring 24 as San Antonio went 16 of 32 from behind the arc, rolling to the third-biggest victory in finals history.

“Those guys shot incredibly,” Duncan said. “Gave us the breathing room when we needed it.”

Neal could be even more important going forward, after starting point guard Tony Parker revealed fresh concerns about his sore hamstring. He plans to get an MRI on Wednesday.

Duncan bounced back from his worst game ever in the finals, and the Spurs’ combination of fresh faces and old reliables dominated the NBA’s winningest team before an eager crowd that hadn’t seen the finals here since 2007.

“It shouldn’t be a surprise,” said Spurs coach Gregg Popovich. “These are the last two teams standing. I don’t think either one of them is going to get down if they have a bad night.”

The Spurs were as good as fans remembered in the old days, shutting down James until they had built a huge lead late in the third quarter.

James finished with 15 points and 11 rebounds, but missed 11 of his first 13 shots against the excellent defense of Kawhi Leonard, who had 14 points and 12 rebounds.

Game 4 is Thursday here, where the Heat are 3-22 in the regular season and so far zero wins and one really bad beating in the postseason.

“We got what we deserved,” Heat coach Erik Spoelstra said. “I didn’t even recognize the team that was out there tonight.”

Duncan shot 3 of 13 for nine points, his worst performance in his 25 NBA Finals games, in the Heat’s 103-84 victory Sunday. Parker wasn’t much better, shooting 5 of 14 and committing five turnovers, and Manu Ginobili admitted afterward the veteran trio had to play well for the Spurs to win.

They were fine, but the lesser-knowns were better.

Parker and Ginobili combined for 14 assists, but the bigger story was the guys who had never played on this stage before.

Neal, who went undrafted after playing for LaSalle and Towson, then playing overseas for three seasons in Italy, Spain and Turkey.

Green, who had been cut multiple times - including by James’ Cavaliers - and now has the shot to stick.

Leonard, the draft-night trade acquisition from San Diego State who played the NBA’s four-time MVP to a stalemate.

“It’s a dream come true,” Neal said. “Me and Danny both went through a lot of stuff together. We were guys that showed up two hours before practice started to get shots up and to prove to the coaching staff that we belong, and we’re going to do whatever we need to do to get minutes.

“So me and Danny, we were able to play great tonight.”