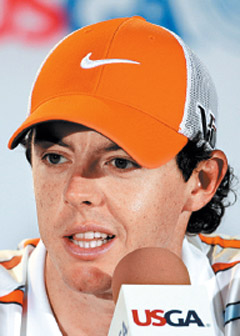 ARDMORE, Pennsylvania ? From No. 1 to just one of many, Rory McIlroy’s game has clearly hit a rocky patch.

“I was half thinking of going to the steps in the city, the Rocky steps,” he said. “Wherever they are, going to run up those. Just because we are where we are.”

McIlroy has more in mind than landing triumphantly at the top of the Philadelphia Museum of Art’s steps. He’d like to leave an imprint on Philadelphia as the U.S. Open champion.

First, he needs to find the eye of the tiger, even at the risk of catching Tiger’s eye. McIlroy will be part of the feature group the first two rounds, playing with Tiger Woods and Adam Scott - Nos. 1, 2 and 3 in the world rankings. 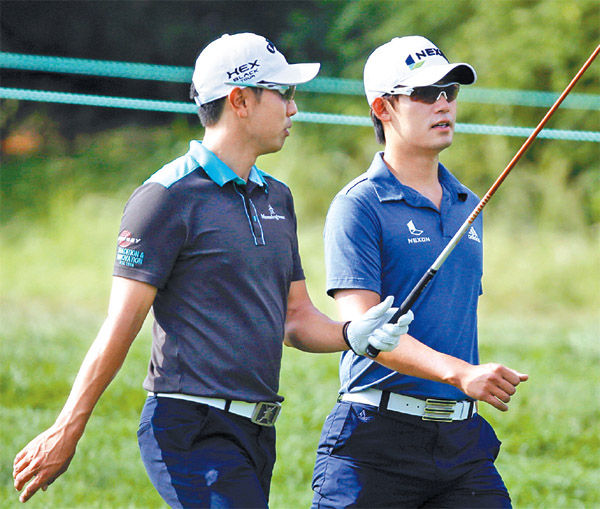 Koreans Bae Sang-moon, left, and Kim Bi-o, who will play for the first time in the U.S. Open, walk up the 15th hole during practice for the season’s second major golf championship at Merion Golf Club, Tuesday, in Ardmore, Pennsylvania.[AP/NEWSIS]


Woods, Scott and Graeme McDowell have been rattled off at the top of the list of contenders who can win this week at Merion Golf Club. In just six months, McIlroy has gone from golf’s next great player to a mere afterthought at Merion.

Most weeks, he hasn’t come close to winning. The 24-year-old from Northern Ireland believes his game is rounding into form, and it might help that conditions at Merion are soft because of days of rain, just as it was at Congressional for his record U.S. Open win.

“I much prefer this sort of golf,” he said Tuesday. “I expect the scores to be a little lower than what they would be if the course was a little firmer.”

McIlroy won the 2012 PGA championship on Kiawah Island to go along with his U.S. Open title in 2011. But he finished 25th at the Masters this year and is coming off a brutal 78 at the Memorial Tournament. He barely made the cut and finished 57th. He also has 33rd- and 45th-place finishes on his resume and quit in the middle of a round at the Honda Classic.

He played well to get in contention at the Texas Open in early April, finishing second with a final-round 66 for his best finish of the year.

“This year, I feel like my game’s actually in good shape,” he said, referring to his Open chances. “I feel coming in this year I’ve got a way better chance than I did last year.”

With just about every camera, reporter and fan at the course turned to the McIlroy-Woods-Scott grouping, the buzz from the first hole of the tournament might well feel more like the first hole of a playoff. And maybe that can give McIlroy’s game a jolt.

“It gets you focused from the first shot,” he said. “There’s going to be a lot of attention on that group and it’s just nice to be a part of it.”